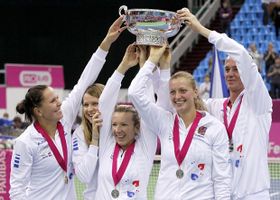 Lucie Hradecká, Lucie Šafářová, Květa Peschke, Petra Kvitová, Petr Pála, photo: CTK The Czech Republic won its first Fed Cup title in 23 years on Sunday after players Květa Peschke and Lucie Hradecká defeated Russia’s Maria Kirilenko and Elena Vesnina in a decisive doubles match. The final result was the Czech Republic 3 to Russia’s 2. Instrumental in the final were two singles wins by world No.2 Petra Kvitová, in what for her has been a phenomenal season that includes winning Wimbledon and the recent WTA Championships. The Czechs have now won a total of six Fed Cup titles but Sunday’s was the first title by the Czech Republic and not Czechoslovakia. Their last Fed Cup title won was back in 1988 as part of Czechoslovakia when the team beat the Soviet Union 2:1.

After her and her teammate’s triumph on Sunday, here’s what player Květa Peschke had to say:

“We feel fantastic and this has been an unbelievable experience for us after so many years! It’s really an amazing feeling and it is tough to describe. I’ve played on this team for 13 years and I’m so proud of that and all the girls and all the people in our organisation, the people we have around. It was fantastic and we are so happy we did it this time!” 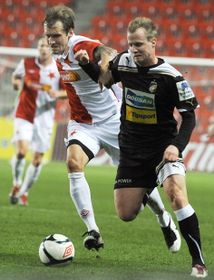 Róbert Cicman (Slavia), David Limberský (Viktoria Plzeň), photo: CTK In football, things have been picking up for Slavia: under new head coach František Straka – criticised at first by diehard fans – the Prague club has now won three matches in a row. At the weekend Slavia came back from 1:0 against defending champions Viktoria Plzeň to win: Zbyňek Pospěch scored the equaliser and Hurka put Slavia ahead. The team in now ninth in the standings, while Plzeň are fourth. First in the league are Sparta Prague, followed by Liberec, while Mladá Boleslav are currently in third place.

Čech doubtful for playoff against Montenegro 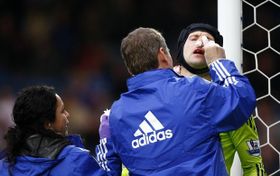 Photo: CTK Czech goalkeeper Petr Čech is doubtful for the Czech Republic’s opening playoff qualifier against Montenegro for the Euro 2012 Championships. The goalie broke his nose in the ninth minute in a match against Blackburn in a collision with fellow Chelsea teammate Ashley Cole. Despite the accident, Čech played until the end of the game and kept a clean-sheet: Chelsea won 1:0.

On his official website, Čech indicated he was uncertain about the all-important upcoming playoff – matches on the 11th and 15th of November – which will decide whether the Czechs stay home next summer or play in Poland and Ukraine. According to the player on his website, he will have to have a mask along with the headgear he has worn since a skull fracture in 2006. He joked on his website that would make him “look like Batman”. Tomáš Plekanec, photo: CTK In the NHL at the weekend the Philadelphia Flyers demolished Columbus 9:2. Jaromír Jágr scored once and earned an assist for the Flyers while Jakub Voráček also scored and earned two assists. Jágr is currently the top Czech player in the NHL with 15 points in 14 games. In other action, goalie Tomáš Vokoun lost in net for Washington, allowing four goals by the New York Islanders, in a 5:2 loss. Montreal Canadien Tomáš Plekanec racked up three assists for his team against the New York Rangers but it wasn’t enough: the Habs lost 5:3.