Petra Kvitová, photo: CTK Czech tennis player Petra Kvitová, this year’s Wimbledon champ, capped an incredible season at the weekend by becoming only the third player to ever win the WTA Championships in her maiden run. In the final in Istanbul on Sunday, the 21-year-old Czech player faced Victoria Azarenka of Belarus and appeared to have things well under control in the first set, taking a stranglehold 5:0 lead.

But Azarenka showed good form of her own and was able to come back, winning the next five before Kvitová regained her momentum. In the end Kvitová edged the first set 7:5. Then she lost the second 4:6, but came back in the final set, breaking Azarenka’s serve twice to win it 6:3. Kvitová’s triumph pushes her to No.2 spot in the world rankings not far behind Caroline Wozniaki of Denmark. Kvitová began the year outside the top 30 – so a huge surge for her and one she admitted that neither she nor her trainers had expected. Shortly after her win in Istanbul, just before receiving the Billy Jean King Trophy, here’s what she had to say:

“I don’t know if I will find the words but when I started this season I didn’t expect to end up here as a champion and to have a grand slam title already. It was unbelievable to play here and the people were great. It was a ‘fighting’ final and I really have to congratulate Victoria – you had a great season and good luck next year. I also have to say thank you to all the people on my team: it’s unbelievable to have you here with me all this time: thank you very much!” Petr Johana (Mladá Boleslav), Léonard Kweuke (Sparta Prague), photo: CTK In football, Sparta Prague lost their second-straight home game falling to 3:0 to Mladá Boleslav after an earlier loss to Liberec, indicating the league leaders are a little short of steam towards the end of the first half of the season. Sparta are now just six points ahead of their nearest rivals Viktoria Plzeň (the defending champions) and third-place Liberec. Mladá Boleslav’s win at Letná stadium was the team’s first win there in four years. 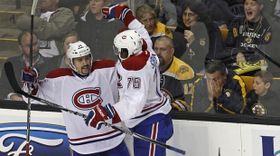 Tomáš Plekanec, P.K. Subban, photo: CTK In hockey, Czech forward Milan Hejduk, who plays for Colorado in the NHL, has scored four goals so far this season, the latest coming against the Los Angeles Kings. Picking up the puck off a strange bounce, he was able to put it way, giving his team a 2:1 lead. The Kings went on to lose 3:2.

In other action, The Montreal Canadiens swept a home-and-home series with their classic rivals the Boston Bruins, beating the defending Stanley Cup champions 4:2 on Saturday. Tomáš Plekanec, named the game’s third star, earned a goal and an assist. Two days earlier in the other Bruins-Canadiens match-up, the player scored the winning goal in the 3rd. The Czech player leads the Canadiens in productivity so far this season with four goals and five assists. 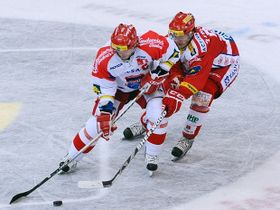