Unemployed Jágr gets a Golden Stick 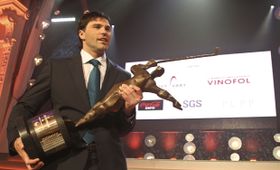 Jaromír Jágr, photo: CTK Jaromír Jágr walked away from a ceremony at Karlovy Vary’s Grandhotel Pupp on Sunday with his tenth ever Golden Stick, a prize given annually to the best Czech hockey player of the season. It was three years ago when the star forward received his last Golden Stick, which is voted on by hockey trainers, specialists and journalists who chose Jágr by a wide margin over centre Tomáš Plekanec, followed by Roman Červenka in third place. Regarding that ranking, Jágr had this to say to Czech Radio:

“If Tomáš Plekanec had not been at the world championships, if he had advanced with Montreal, then there is certainly no way I would have a Golden Stick. I can say the same thing about Roman Červenka, who I played with the entire season. Roman had an outstanding season, especially in terms of shots on goal. All I can say is they really helped me a lot and I hope I also helped them to get those rankings.”

A big question for currently unemployed Jaromír Jágr was whether he might be bringing his golden stick back to play in his home team Kladno, or whether he would aim for a comeback in the NHL. In his role as Kladno president, Jágr has been making a vehement attempt to save the troubled first league club – has he found being a manager and official tougher than shooting goals?

“Hard to compare. Right now, it’s harder than scoring goals… and I was trained to score goals. Things are difficult in different ways, the important thing is to put as much work into it as you can and you have to hope that the good results will come. Our goal is to get Kladno to the level it was at before. Especially where the youngsters are concerned. So we hope we’ll manage.” 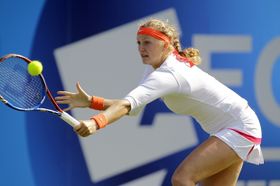 Petra Kvitová, photo: CTK The Wimbledon grand slam starts off with a Czech presence right from the first day, with Petra Kvitová drawing American Alexa Glatch for Monday afternoon’s first round. The two have met on the court only once, two years ago, in the Fed Cup semifinals, where Glatch won only three games against the then-19-year-old Czech. Meanwhile, world no. 8 Kvitová just suffered her first loss in a WTA final, losing Sunday to France’s Marion Bartoli 1:6, 6:4 a 5:7 in Eastbourne. Bartoli in turn will now be meeting the Wimbleton junior champion Kristýna Plíšková, who has qualified for the Championship for the first time this year. Elsewhere on the courts, in the first round of men’s singles, Radek Štěpánek will come up against Spaniard Fernando Verdasco and Czech no. 1 Tomáš Berdych awaits Italian Filippo Volandri.

Ujfaluši signs on with Galatasaray

In football, defender Tomáš Ujfaluši is leaving Atlético Madrid to join his countryman Milan Baroš in Galatasaray S.K. The Turkish club has announced on it has signed a two-year contract with a one-year option with the former Czech national team captain after agreeing with Madrid on the terms of transfer for him and two other players – the best player of last year’s world cup Diego Forlán of Uruguay and Spanish striker José Antonio Reyes. Galatasaray has decided to muscle up after finishing eighth in the Turkish league last season. Ujfaluši was with Atlético from 2008 and helped them win the European League in the 2009/2010 season.

The Czech women’s basketball team has made a good showing at the European Championships with a win over Great Britain 60:45. The second round victory at Bydgoszcz (BYDGOŠČ), Poland, secures them a place in the top 16, in spite of heavy defence on the part of their British rivals and none-too-impressive shooting on their own part. The obvious exception to the latter was 21-year-old Kateřina Elhotová, the star of the game who overtook many a more experienced player to score nearly half of the Czech team’s points on her own. After the match she refused to say there was any particular method to her success on Sunday, which included netting six out of eight 3-point-shots:

“Once you start netting the ball then you can shoot from anywhere… The only thing that can be said now is let’s not rest on our laurels. It went well and it will go well again; every match is different.”

The next match, Monday evening, will be different indeed, when the Czechs come up against the more tactically minded Belarusians, which will determine the group winner.