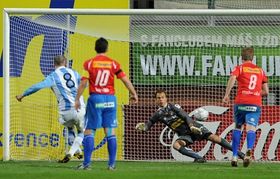 Mladá Boleslav - Plzeň, photo: CTK League-leaders Plzeň stumbled for the first time this season, losing 4:3 to Mladá Boleslav. The loss cut short an 11-game winning streak; the team had also been 18 matches without a loss. The team also conceded its most goals against an opponent since March; back then Plzeň lost 4:0 also, as it happens, against Mladá Boleslav. Plzeň remains atop the table – ahead of nearest rival Olomouc by nine points.

In other football action, Prague club Slavia went into their game against České Budějovice knowing a loss would see the team plummet to the bottom of the standings. In the end, the team staved off that possibility: Slavia scored four times to triumph easily over České Budějovice. The final score was 4:0, landing the team 9th spot.

Incidentally, on Monday Ostrava announced that they will replace coach Miroslav Koubek; the club is not satisfied with the teams results, leading the club to call off their arrangement. Ostrava lost 3:1 against Jablonec Sunday and would be in very last place if they weren’t better off than Ustí on points. Brno is in second-last place after running rampant over Slovácko 7:0.

Hockey: Vítkovice return to top with win over Litvínov 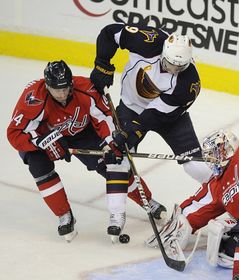 Tomáš Fleishmann (left), goalie Michal Neuwirth, photo: CTK In hockey, Czech club Vítkovice beat Litvínov 4:2 on Sunday to return to the top of the standings over České Budějovice who lost 2:4 against Plzeň.

Meanwhile in action overseas, Czech forward Tomáš Fleishmann scored the winning goal in overtime for the NHL’s Washington Capitals at the weekend, defeating Atlanta by a score of 4:3. Another Czech who has been doing well – Washington goalie Michal Neuwirth – was also instrumental in the win, turning away 29 shots. The Capitals had lost their two previous games. 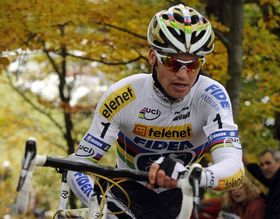 Zdeněk Štybar, photo: CTK Czech cyclo-cross racer and world cup champion Zdeněk Štybar won the second race of the World Cup circuit at the weekend in Plzeň, his seventh win in a row this season. Štybar won the Elite Men's race in front of his home crowd after leading most of the race together with team-mates Pauwels and former World Champion Niels Albert. The 26-year-old Czech rider tops the rankings with 440 points followed by the United States’ Jeremy Powers in 2nd place with 377.

Speed skater Sáblíková gets off to successful start in new season

Speed skater Martina Sáblíková got off to successful start in new season: she won her first start in the three kilometre in Berlin. She finished roughly 20 seconds ahead of her nearest competitor, German racer Bente Kraus. Fellow Czech racer Kateřina Erbanová was third. Overall, the Czech team coach Petr Novák expressed satisfaction regarding the team’s performance.