Berdych and Kvitová go into action at US open 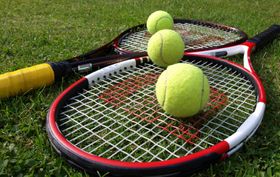 Photo: Ruth Livingstone / Stock.XCHNG Tennis’ US Open begins at Flushing Meadows on Monday with two main Czech hopefuls, Tomáš Berdych and Petra Kvitová. Seventh seed Berdych, who reached the Wimbledon finals earlier this year, will face Michael Llodra of France in the first round; Berdych said the Frenchmen was his least favourite opponent for the opening round; the Czech also complained about the schedule as he might only get to the court on Wednesday.

The biggest hopeful in the women’s singles, Petra Kvitová, seeded 27, will play another Czech, Lucie Hradecká, in the first round on Monday. Kvitová reached her first Grand Slam semi-finals at Wimbledon earlier this year, but has not been doing very well since then. The 20-year-old Czech player hopes she will improve.

“I think people don’t expect much from me, after I was recently eliminated in the first rounds. I expect I will be nervous in the first round but I will put up a fight. After Wimbledon, it took me a long time to adjust to hard surfaces, and when I played badly and lost, I was really confused. But I’m trying to put that behind me, and I hope you won’t keep reminding me… But it’s going to be better here. I feel fine and I like it here.” 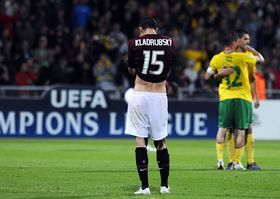 Photo: CTK Turning to football now, where the Czech title holders Sparta Prague ended their agony in the Champion League qualification on Tuesday after losing 1:0 to Žilina in the second leg of the play-offs. The Czech club need to overcome a two-goal deficit at Žilina and built up sufficient pressure but never managed to score. The closest they came was in the 54 minute when Sparta were awarded a penalty. But Jiří Kladrubský botched it, which was it for the Czech champions. After the game, Kladrubský apologized to his team mates and fans.

“I kicked it like a beginner. I apologize to the guys, and all the fans because that’s not how it’s done. We were not resigned to the game when we got here; we knew we had nothing to lose and we fought; we wanted to score to shake it up a little and make them nervous, but it did not happen. It was my fault.” 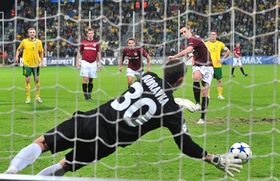 'I kicked it like a beginner...', photo: CTK Sparta Prague did not make it into the big bucks Champions League but will at least play another European club competition, the Europa League. On Friday, they drew their opponents in the group stage: CSKA Moscow, Italy’s Palermo, and Lausanne of Switzerland. In the first match, Sparta will host Palermo on September 16. Sparta’s manager Josef Chovanec says it will be an opportunity to improve their reputation.

“Europa League is a big opportunity for us to fix our reputation, and we should do it really fast. We have a big debt towards our fans and towards the public. This is a chance to present ourselves in a completely different light” 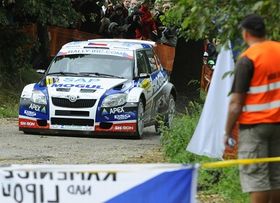 Barum Czech Rally Zlín, photo: CTK In the world of motorsport, the Czech-hosted Intercontinental Rally Challenge concluded with a dramatic finish in and around the eastern city of Zlín at the weekend. On Sunday, the lead of the Barum Czech Rally Zlín 2010 changed hands three times. Overnight leader and defending champion Jan Kopecký, spun and ended in the ditch. He managed to get back on track but made another mistake, failing to reach the finish line. In the end, Belgium’s Freddy Loix took his sixth win in a row and became the most successful driver in the series’ history. Second place went to Fin Juho Hanninen, and third came the best Czech, Pavel Valoušek; all of them driving a Škoda Fabia which dominated the event.