In Sports News this Monday: Jorge Lorenzo wins the Czech Grand Prix, but only teenager Jakub Kornfeil gives local fans something to cheer about in Brno with a sensational finish in the 125cc race; Viktoria Plzeň remain in front in the Czech football league, while title-holders Sparta prepare to face Žilina for a place in the Champions League; and close but no third 2010 victory over Federer for Tomáš Berdych. 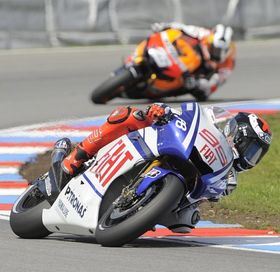 Jorge Lorenzo, photo: CTK The biggest sporting event in the Czech Republic at the weekend was unquestionably the MotoGP in Brno. This year the country’s leading motorsport meeting attracted just under 240,000 spectators over three days. The main draw was of course Sunday’s Czech Grand Prix, which saw Jorge Lorenzo of Spain claim his seventh race victory of the season and extend his overall lead in the championship. 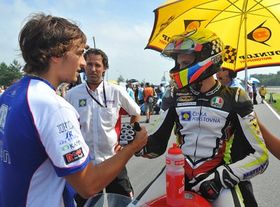 Karel Abraham and Lukáš Pešek, photo: CTKLocal fans will have been disappointed when Czech rider Karel Abraham was forced to pull out of the Moto2 class final after a fall during Saturday’s heats left the promising 20-year-old with mild concussion. The more experienced Lukáš Pešek did line up, but was forced to abandon the race after a technical problem with his front wheel about half way through it. Patrik Vostárek also failed to finish. 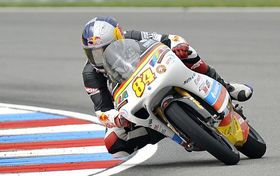 Jakub Kornfeil, photo: CTKBut Czech motorsport fans did have something to cheer, when 17-year-old Jakub Kornfeil managed a sensational fifth-place finish in the 125cc race. The baby-faced rider was only nine seconds from becoming the first Czech on the podium in Brno in three years. 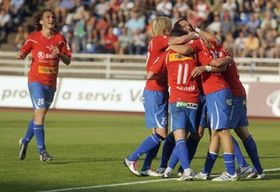 Viktoria Plzeň - Slovácko, photo: CTK Viktoria Plzeň are still going great guns in the Czech football league. They beat Slovácko 3:0 on Sunday to retake top spot, after Olomouc briefly headed the table following a 2:1 victory over Baník Ostrava the previous day. Sparta Prague are now third behind Olomouc, after a 1:0 away win over Příbram. In one other notable match, Slovan Liberec took three points for the first time this season with a 3:1 away win over Slavia Prague, who were themselves beaten for the first time this term. 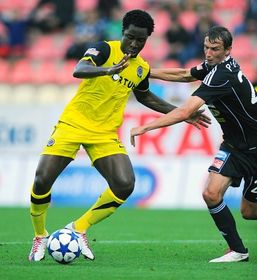 Bony Wilfried, photo: CTK Sparta will be in action again on Tuesday night, when they host the Slovak champions Žilina in what will surely be one of the games of their season: the first leg of the final qualification round for the big-bucks Champions League. The Czech title-holders are keeping shtum about their planned line-up, but it is clear they’ll be without three key players: Bony Wilfried, Marek Matějovský and Libor Sionko are all suspended. Sparta were last in the Champions League group stage five years ago, while Žilina have never made it that far.

Berdych fails to make it three wins over Federer this season 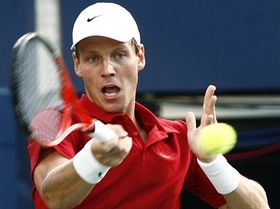 Tomáš Berdych, photo: CTK Tomáš Berdych failed to make it three wins over Roger Federer this year, when the two met in the quarter finals at the Rogers Cup in Toronto on Friday. The Czech was 5:2 ahead in the final set, but the Swiss clawed his way back into it and took the match in a tie-break. Berdych, who is 24, remained a career-best seventh when the world rankings were issued on Monday.