In Sports News: Sparta Prague win the Czech football league after one of the most dramatic season finales in recent years, setting a couple of impressive records along the way; defender Tomáš Řepka is the hero of the day after his goal seals the title; and the Czech Republic are on the ropes at the Ice Hockey World Championship in Germany. 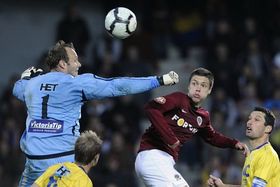 Sparta - Teplice, photo: CTK The Czech soccer league saw its most dramatic finale in a few years, when with one game left to play three teams were still battling it out for the title; going into the final round, Sparta Prague were ahead of Baník Ostrava on goal difference alone, while Jablonec were breathing down both clubs’ necks just one point behind.

In the end, Sparta’s experience showed through in a 1:0 win over Teplice in the capital. When Baník could only manage a 2:2 draw with Příbram, Jablonec took second spot after a 2:0 victory over České Budějovice.

Midfielder Libor Sionko was asked why he thought Sparta had taken their 11th title since 1993.

“Because the club didn’t lose all season. For my taste, though, there were too many draws. Three wins and two defeats are better than five draws. It was tough in that we really had to fight to the last minute. Of course there were nerves and you would think, what if, what if things don’t go our way? But in the end those thoughts were put to one side – that was clear on the pitch.”

Erich Brabec, photo: CTK By the way, Sparta have become the first Czech team to go through a whole season in the top flight without a single defeat. Along the way they only conceded 14 goals, which is also a record. Those stats can no doubt be at least partly attributed to a solid defence built on centre backs Tomáš Řepka and Erich Brabec. The former was the hero of hour on Saturday, scoring the only goal of the game that sealed the title. Řepka, who said he was feeling “delirious”, paid tribute to the club’s fans. Czech Republic - Switzerland, photo: CTK The Czech Republic are on the ropes at the Ice Hockey World Championship in Germany, after a 3:2 defeat to Switzerland in their first qualification round game on Saturday. The Czechs simply cannot afford to slip up in their next game against Latvia on Monday night; that match takes place after the recording of our programme.