In Sports News this Monday: Pardubice make home advantage pay to go 2:0 up in the Extraliga final, with young forward Daniel Rákos and veteran goalie Dominik Hašek making most headlines; Sparta Prague drop two points in the race for the Czech league title and have to see out season without goalkeeper Jaromír Blažek; and Czech javelin star Barbora Špotáková is named an “ambassador” for the new Diamond League. Pardubice - Vítkovice, photo: CTK Pardubice made home advantage pay in the first two games of the ice hockey Extraliga playoffs final. In Saturday’s opening match they beat Vítkovice 5:1, with one of those goals coming from 22-year-old forward Daniel Rákos. Rákos scored just once in 27 games for Pardubice in the regular season, and only found a place in the team when Jan Starý’s season was cut short by surgery. But the youngster has certainly seized his opportunity: he scored again in game two on Sunday, a 1:0 win that has given Pardubice a new league record of 10 playoff victories on the trot.

Daniel Rákos has been sharing the headlines with team-mate Dominik Hašek, who at 45 is literally twice his age. The legendary goaltender needed stitches on his chin during Saturday’s opening game, but was clearly unaffected, notching up his third shutout of the knock-out phase in Sunday’s match. If his fine form can help Pardubice triumph in the best-of-seven series, that would represent a remarkable personal achievement for Hašek: winning two league trophies with the same club 21 years apart!

Vítkovice will of course be hoping to thwart that ambition when the playoff final moves on to their north Moravian stadium for games three and four on Wednesday and Thursday. 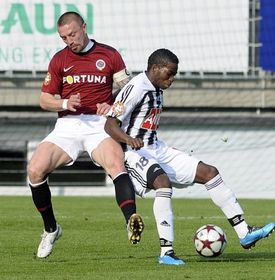 Sparta Prague - České Budějovice, photo: CTK Czech football league leaders Sparta Prague dropped two points at the weekend when they were involved in a 0:0 draw at České Budějovice. What’s more, Sparta will have to do without key player Jaromír Blažek for the rest of the season, after the goalkeeper was injured in a cup tie last week. Baník Ostrava will pull even on points with Sparta if they win a game at Slovan Liberec on Monday evening, after the recording of our show. Barbora Špotáková, photo: CTK The Czech javelin star Barbora Špotáková finds herself in exalted company as one of the 14 “ambassadors” of the new Diamond League series of athletics meetings, alongside the likes of Usain Bolt and Blanka Vlasic. The IAAF is introducing the Diamond League this year as a replacement for the Golden League, with the difference that it also takes in venues beyond Europe, such as in the US and China. Špotáková told the newspaper Lidové noviny that she was pleased, as the Golden League hadn’t included the javelin; the Olympic champion and women’s world record holder said the new system would give athletes in less prominent disciplines a shot at the USD 1,000,000 prize money.