In Sports News this Monday: the Czech Republic make very light work of Belgium to reach the last eight in tennis’s Davis Cup, not dropping a set on their way to victory in just six and a half hours; cross country skier Lukáš Bauer comes second in the 30 km pursuit in Finland’s Lahti; and Teplice and Sparta Prague are still neck-and-neck in the Czech soccer league after victories at the weekend. 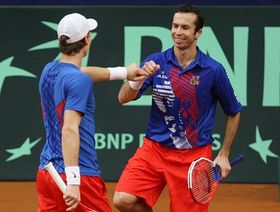 Tomáš Berdych, Radek Štěpánek (right), photo: CTK The Czech Republic have advanced to the last eight in tennis’s Davis Cup, after victory over Belgium in the city of Bree at the weekend. Last year Radek Štěpánek and Tomáš Berdych powered the Czechs all the way to the final of the Davis Cup, and the two again impressed against the Belgians, when they both won their singles rubbers before combining in the doubles to secure an unassailable 3:0 lead. In fact, the Czechs could hardly have made lighter work of their hosts, not dropping a single set in the first three matches to wrap the whole tie up in only six and a half hours. Tomáš Berdych had this to say on Saturday, after he and Štěpánek had beaten Olivier Rochus and Steve Darcis in the doubles.

“We returned extremely well, they were forced to play every ball, even though Darcis did serve excellently. We played a lot into the corners and we didn’t give them many chances. Our serving was very good and Radek did well to protect his service in the third set, when things might otherwise have become a bit dramatic. We managed the important moments and played just as we needed to – that’s why we won.”

By the way, the best-of-five tie eventually ended 4:1 to the Czechs, who will now take on either Israel at home or Chile away for a place in the semi-finals. 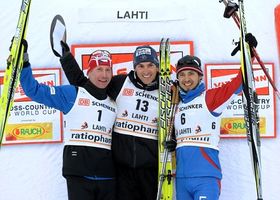 “He was stronger at the finish. I was catching up with him in the stadium but then I didn’t have any more strength. From my point of view there’s no reason to be down about the result: I’m happy with second place. Victory was within reach, but I didn’t manage to capitalise on the opportunity. But like I say, I have no problem or reason to be upset about that.”

That result means that Bauer, who brought two bronze medals home from the Winter Olympics, is now second overall in the World Cup standings behind Peter Northug of Norway. 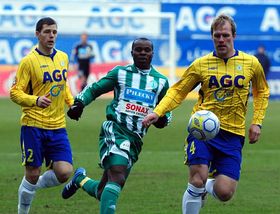 Teplice - Bohemians Praha, photo: CTK Teplice remain on top of the Czech football league after a 2:1 home win over bottom-of-the-table Bohemians Praha at the weekend. Sparta Prague are level on points with the leaders after a 1:0 away win over second-from-bottom Kladno, though Teplice have one game in hand. Baník Ostrava have leapfrogged Jablonec into third spot, after beating the north Bohemian side 4:1.