In Sports News this Monday: Zdeněk Štybar becomes the first Czech in 19 years to win the Cyclo-cross World Championships, in front of a home crowd in Tábor; Czech Karolína Plíšková takes the junior title at the Australian Open; and goalie Tomáš Vokoun sets a new personal record for shutouts in one season in ice the NHL.

Zdeněk Štybar has become the first Czech in 19 years to win the Cyclo-cross World Championships, after outclassing the competition in front of a home crowd in the south Bohemian town of Tábor. Štybar, who just last weekend won the World Cup in cyclo-cross, didn’t get off to an ideal start on Sunday when his tyre split at the end of the first round and he had to replace a wheel. That left the 24-year-old needing to catch up on the leaders but, cheered on by Czech fans, it didn’t take him too long to move into first place and he finished a full 30 seconds ahead of his 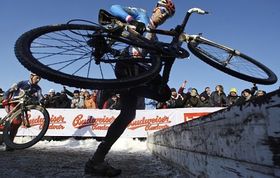 “It’s incredible, it’s the experience of a lifetime. The fans were simply unbelievable, they cheered the whole way along the track and I enjoyed it immensely. Throughout the whole season there’s been constant pressure, with everybody asking me about the World Championships. But I withstood it, and showed today that I’m mentally strong.”

The Czech Republic’s Karolína Plíšková won the junior title at the Australian Open on Sunday. The 17-year-old beat Laura Robson of the United 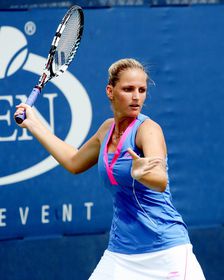 Karolína Plíšková, photo: robbiesaurus, CC BY-SA 2.0 Kingdom 6-1 7-6 to take the title in what was her first appearance at the Melbourne tennis tournament. Interestingly, Robson had earlier defeated her twin sister Kristýna, in the semi-finals. Karolína Plíšková had this to say of her own success.

“It feels like it hasn’t sunk in yet. Sometimes when I don’t do well I’m angry with myself, but when I am successful…I am happy, but I don’t show it too much.” 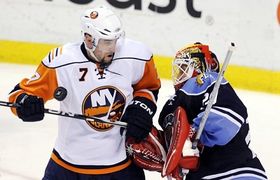 Tomáš Vokoun (right), photo: CTK Czech goaltender Tomáš Vokoun has set a new personal record for shutouts in one season in ice hockey’s NHL. Vokoun now has seven clean sheets to his name, after his Florida Panthers beat New York Rangers 2:0 on Sunday. Czech fans will be hoping the man from Karlovy Vary can take his absolutely phenomenal recent form to the Olympics, which get underway in Vancouver at the end of next week.