In Sports News this Monday: the Czech Republic’s tennis player of the year is…the country’s whole Davis Cup team; the Czech women’s floorball team reach the last four at the World Championship for the first time, but come home empty handed; speed skater Martina Sáblíková wins a World Cup 3000m race in her second best time; and Sparta and Slavia face their last games of 2009 in football’s Europa League, though only the former have something to play for. 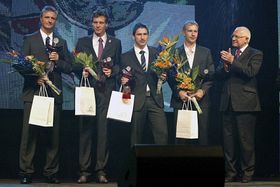 Coach Jaroslav Navrátil, Tomáš Berdych, Jan Hájek, Lukáš Dlouhý, Czech President Václav Klaus (left to right), photo: CTK This year’s Golden Canary award for the Czech Republic’s tennis player of the year has gone not to an individual but to the whole of the country’s Davis Cup team. The Czechs reached the competition’s final this year for the first time since Czechoslovakia won it in 1980, only to be beaten by the defending champions Spain. After receiving the Golden Canary from Czech President Václav Klaus in Prague on Friday night, one of the Czech team’s key players Tomáš Berdych was asked if he minded the fact it was a shared prize.

“No, absolutely not. Quite the opposite. Maybe it looks strange, but speaking for myself I think that you always celebrate any success you achieve with a team more than success you experience alone. You celebrate it more, you enjoy it more and have what I might call greater team joy.”

The Czech women’s floorball team notched up a first when they reached the last four of their sport’s World Championships in Sweden’s Vaesteras last week. Unfortunately, they lost 1-5 to Switzerland in the semi-final, before later being beaten 3-1 by Finland in a match to decide third place. But the coach of the Czech floorball team Jaroslav Marx said he was content enough, all things considered.

“We’re disappointed that we didn’t manage to win a medal. But from my point of view, when I look at things with even a tiny bit of distance I have to say I’m not disappointed with how we played at the Championship. We gave our all, and I’m satisfied with how our players approached every game.” 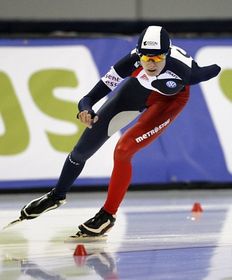 Martina Sáblíková, photo: CTK The Czech Republic’s Martina Sáblíková has notched up yet another success in the speed skating World Cup, winning the 3,000 metres in Salt Lake City on Friday in 3.56.29 minutes. It was the 22-year-old’s second best time ever in the distance. Sáblíková is one of the Czechs’ biggest medal hopefuls ahead of February’s Winter Olympics, and her coach Petr Novák says he believes she can get even better before Vancouver. 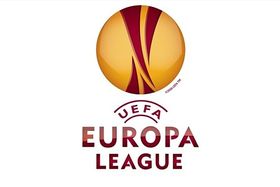 The two big Prague football clubs both have one game left this year. Sparta will be hoping they can make home advantage pay when they face Copenhagen on Wednesday: a win would send the Czech side into the knock-out phase of the Europa League. Slavia, meanwhile, travel to Lille with nothing to play for, after taking only three points in their previous five group games in the same competition.