In Sports News this Monday: the Czechs lose 5:0 to Spain in the final of the Davis Cup in Barcelona – Radek Štěpánek says the Spanish deserved their victory; injury-dogged Tomáš Rosický is “devastated” after picking up a groin strain that will see him sidelined for around a month; and Plzeň move to the top of the ice hockey Extraliga.

Czechs lose to Spain in final of Davis Cup 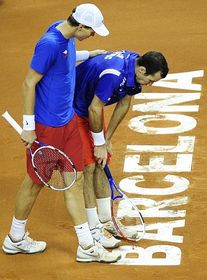 Tomáš Berdych, Radek Štěpánek (right), photo: CTK The Czech Republic have been beaten in the final of the Davis Cup by defending champions Spain. The Czechs last won the competition in 1980, when they were still part of Czechoslovakia, and there was great anticipation ahead of the tie in Barcelona, with many describing it as the biggest event of the year in Czech sport.

Things started brightly on Friday, when Tomáš Berdych performed well against Rafael Nadal in the first set of the opening singles rubber. However, the Spanish star took that set and it was pretty much all downhill from there from the Czech perspective. Radek Štěpánek went two sets up against David Ferrer, before losing in five sets.

That result left the Czechs with a mountain to climb in the best-of-five series, and whatever hope remained was extinguished on Saturday, when Feliciano Lopez and Fernando Verdasco beat Berdych and Štěpánek in straight sets to give the Spaniards an unassailable lead. On Sunday Czech coach Jaroslav Navrátil fielded Jan Hájek and Lukáš Dlouhý in place of his top two players; both were defeated, meaning the final result was 5:0 to Spain. 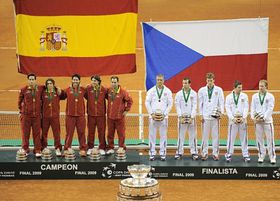 “The Spanish simply deserved to win. They were better and all we can do is take our hats off to how they performed and congratulate them. Next year we will try to repeat what we achieved in getting to the final – and take that extra step. Of course we wanted to do more this time, but that happens.”

The Czech footballer Tomáš Rosický must feel cursed sometimes. After being out for over a year with a serious knee injury, the Arsenal midfielder, who is 29, now finds himself once again consigned to the stands, after picking up a groin strain in the first half of the Gunners’ 2:0 win over Stoke on Saturday. Speaking after the game, Arsenal manager Arsene Wenger said Rosický was devastated, and so was he.

Plzeň have moved to the top of ice hockey’s Czech Extraliga after beating Mladá Boleslav 3:4 on Sunday. The west Bohemian side are now two points ahead of Vítkovice and Zlín, with the former claiming second place thanks to superior goal difference.

In other ice hockey news, coach Vladimír Růžička has just announced the Czech squad for Moscow’s Channel One Cup, their last competition before the Winter Olympics in Vancouver. Included in the squad is Jaromír Jágr. Djokovic and Agassi among stars to attend Štěpánek farewell in Prague

Czech tennis player Radek Štěpánek has bid a final farewell to his career. And the two-time Davis Cup winner has officially hung up…