In Sports News this Monday: young Czech defender Jan Šimůnek wins the Bundesliga with Wolfsburg; with Slavia having taken the Czech league title attention has turned to the fight for second place, with Sparta currently edging it over Liberec; Robert “Bobby” Holík retires after 18 seasons in ice hockey’s NHL; and Czech handball star Filip Jícha puts his club Kiel ahead in the final of the sport’s Champions League. 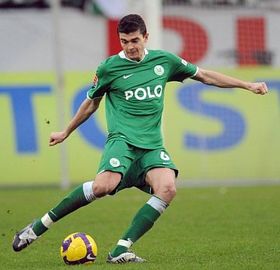 Jan Šimůnek, photo: CTK It’s that time of year when Europe’s soccer leagues reach a climax. Among the Czechs celebrating a winner’s medal is Jan Šimůnek, a 22-year-old defender with Wolfsburg, who on Saturday took the Bundesliga title for the first time in the club’s history. Šimůnek, who joined Wolfsburg from Sparta Prague in 2007, described Saturday’s celebrations.

“The people were incredible yesterday, they were congratulating us as we drove past in convertibles, they all wanted to slap our backs, get autographs, they hugged us…they didn’t want to let us get to the town hall. Normally it’s two minutes from the stadium to the town hall, but it took us over an hour.” 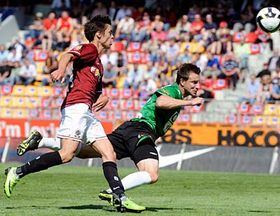 Sparta - Jablonec, photo: CTK Here in the Czech Republic Slavia Prague had already won the league going into the weekend, so attention was focused on the race for runners up spot and a place in the qualifying rounds of the Champions League. After a 3:2 win over Jablonec, Sparta remain in second, two points ahead of the only team that can pass them out, Slovan Liberec, who beat České Budějovice 2:0. Given that Liberec’s last game next weekend is versus Sparta’s arch rivals Slavia, some have suggested the champions may deliberately throw the game, though Slavia players say that is out of the question. For his part, Sparta boss Jozef Chovanec points out that his team’s fate is in their own hands.

At the other end of the table, Viktoria Žižkov were relegated on Saturday when they lost 3:0 at Příbram. Either the latter, Kladno or Zlín will also go down the chute to the second tier next weekend, depending on how their respective games go.

Robert “Bobby” Holík hangs up skates after 18 seasons in NHL 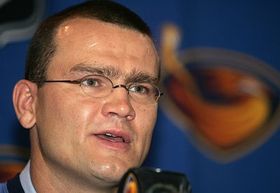 Robert “Bobby” Holík, photo: CTK Robert “Bobby” Holík, one of the greatest Czech players in the history of ice hockey’s NHL, has retired after 18 seasons. The 38-year-old, who won two Stanley Cups with the New Jersey Devils, has played more NHL regular season games than any of his compatriots, and is the second most productive Czech ever after Jaromír Jágr. Holík’s father Jaroslav was a world championships winner with Czechoslovakia. 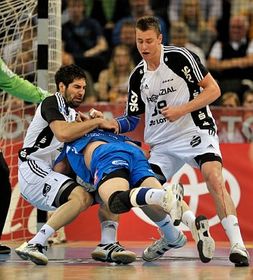 Filip Jícha (right), photo: CTK The Czech Republic’s Filip Jícha – described as one of handball’s greatest players – scored 10 goals in total as his German club Kiel notched up a 39:34 win over Spain’s Ciudadu Real in the first leg of the Champions League final on Sunday. The second leg takes place next Sunday.