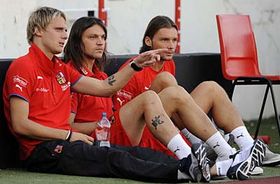 Radoslav Kováč, Tomáš Ujfaluši and Marek Jankulovski, photo: CTK While many countries in Europe played their first qualifying games for the next football World Cup on Saturday, the Czech Republic’s campaign doesn’t begin until Wednesday, when they take on Northern Ireland. Ahead of that match, new manager Petr Rada has injuries to contend with: striker Václav Svěrkoš has been ruled out with a hamstring problem, while stand-in captain Tomáš Ujfaluši, also with a dodgy hamstring, is a doubt. The good news, though, is that left back Marek Jankulovski took part in full training for the first time on Sunday. Jankulovski says he is certain he will be fit for the big game in Belfast:

“I think I’ve benefited from a few days of taking it easy. I had a muscular injury, what you could call muscle cramp, so I had to wait till it eased off a bit. Now I feel good and I’m fully sure I’ll be available to play on Wednesday.”

Petr Rada’s predecessor Karel Bruckner got off to a flying start as manager of Austria, as they began their quest to reach the World Cup with a 3:1 victory over France on Saturday. Bruckner refused to speak to Czech reporters after the game, but nonetheless the back pages in his home country are full of stories about the veteran coach becoming an instant hero in Austria. 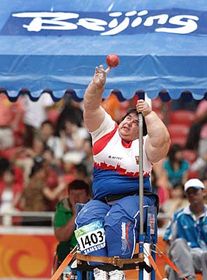 Eva Kacanu, photo: CTK The Czech team has already taken a number of medals at the Paralympics in Beijing. On Sunday, Eva Kacanu, who is in a wheelchair, came first in the F54-56 Classification women’s shot put with a record-breaking throw of 6.73 m. Another gold went on Monday to cyclist Jiří Ježek in the men’s individual pursuit, LC 2. Here’s the first of those two champions, Eva Kacanu:

“I just want to cry. I’m extremely happy. I had health problems this year but everything turned out well. I wanted to break the world record, which I did with my last throw – that means the most to me. I’m simply happy.”

On the opening day of the Paralympics Czech swimmers Jan Povýšil and Běla Hlaváčková both took bronze, the former in the S4 category crawl and the latter in the 100m freestyle, S5 category.

Much for fans to look forward to as Extraliga season begins 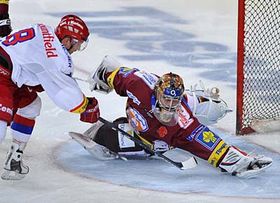 Photo: CTK Czech fans can look forward to an unusually star-studded Extraliga when the elite ice hockey league’s new season gets underway on Tuesday. In fact, 12 members of the team who became legends with gold at the 1998 Winter Olympics are now playing with Extraliga clubs – among them Martin Straka at Plzeň and David Vyborný and Martin Ručinský at Sparta Prague. Sparta, who have invested most heavily during the summer, are the bookies favourites to win the league. Meanwhile, fans of Slavia Prague and České Budějovice can look forward to seeing their teams in the Champions Hockey League, a new and potentially very lucrative European club competition.