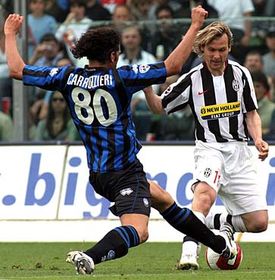 Pavel Nedvěd (right), photo: CTK Czechs football fans have received no word yet on a possible return by Pavel Nedvěd to the national team. In a month and a half the Czechs will kick off the European football championship, Euro 2008, against Switzerland. But, it is quite possible the team will do so without injured captain Tomáš Rosický. In recent weeks there has been increasing speculation that Nedvěd, who plays for Juventus, could make a comeback for the Czech squad. The star midfielder, who had 91 caps for the team before retiring from international play, is renowned for his playmaking skills as well as workhorse-like tenacity.

Last week national team manager Vlastimil Košťál suggested that Nedvěd and team coach Karel Brückner had already broached the subject of a comeback but if they have they aren’t saying anything for the time being. Only Juventus coach Claudio Ranieri at the weekend made his position clear: he told Italian journalists he was “convinced” Nedvěd would play at Euro 2008. Ahead of Juventus’s 4:0 demolition of Atalanta at the weekend, the coach described the midfielder as the “the same old Pavel, hungry to win”.

Jarolím seen as contender to replace Brückner as national side coach

The Czech daily Sport has reported that Slavia coach Karel Jarolím might be a favourite to replace national football squad coach Karel Brückner who has announced plans to step down after this summer’s European competition. The daily writes in its Monday edition that Jarolím and team manger Vlastimil Košťál as well as coach Karel Brückner held a secret meeting in Prague last week. Could Jarolím be the man for the job? In the past he indicated an obvious willingness but isn’t saying now. Slavia owner Petr Doležal, on the other hand, has suggested he would not be happy to let Jarolím go: the team has a contract with the coach until 2010.

Meanwhile, three other contenders have also been mentioned as favourites for national team coach, former Sparta player and coach Ivan Hašek among them.

Sparta edge ahead of Slavia in league standings 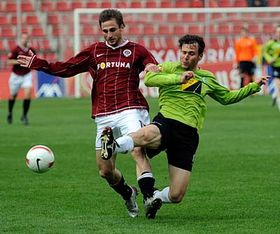 Sparta Prague - Most, photo: CTK Football club Sparta Prague remain three points ahead of Slavia in the domestic league standings: Sparta downed last-place Most 3:0 at the weekend putting pressure on Slavia to beat tough opponents Teplice on Monday. Slavia will need to keep pace with Sparta in order to keep hopes for winning the league championship alive. Sparta, meanwhile, are on a roll, having allowed only three goals in their last ten games. Tomas Řepka scored for Sparta at the weekend, his first goal for the team in a decade.

New York Ranger’s captain Jaromír Jágr had a shining Game 5 in the Stanley Cup playoffs, scoring once and earning two assists to oust the New Jersey Devils in the first round of the NHL playoffs. The Rangers wrapped up the quarterfinal series in New Jersey. 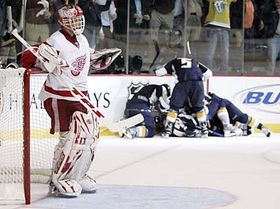 Dominik Hašek, photo: CTK In other action, the Detroit Red Wings secured their spot in the next round by defeating the Nashville Predators in Game 6, but this time the team did so without Czech goalie Dominik Hašek. The team’s other seasoned goalie Chris Osgood replaced Hašek after his poor performance in Game 4. Whether he will alternate with Hašek now or replace him as the starter is a question the team’s coach will have to consider ahead of the next round. 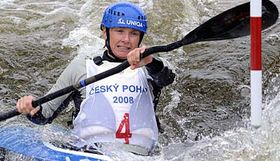 Štěpánka Hilgertová, photo: CTK Two-time Olympic Gold medal winner Štěpánka Hilgertová secured a spot on the roster of athletes for the upcoming Olympic Games after coming in second in the kayak slalom in Prague at the weekend. The games will be the 40-year-old racer’s 5th. Hilgertová feels confident she can clinch another medal; the legendary kayaker won gold both in Atlanta in 1996 and at Sydney in 2000. Her race in rough waters at Prague’s Troje was by no means an easy one, she later admitted – one mistake could have easily marred her finish.