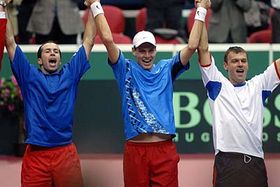 The Czech Republic booked a spot at the Davis Cup quarterfinals after beating Belgium 3-2 in matches in Ostrava, Moravia, at the weekend. On Friday, world No. 10 Tomáš Berdych dispatched Kristof Vliegen in straight sets in less than two hours, the score 6:3, 6:1, 6:4 while Radek Štepánek – returning to the Davis Cup after a three-year absence – edged Steve Darcis 7:6, 7:6, 6:4. 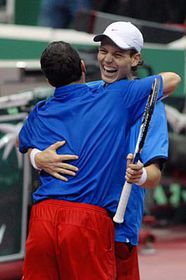 On Saturday Berdych and Štepánek surprisingly teamed up in the doubles, instead of Pavel Vízner and Lukáš Dlouhý. Berdych and Štepánek didn’t have it easy: more than four hours were needed to clinch the gruelling five-setter. Afterwards here’s what Tomáš Berdych had to say:

“It was clear from the beginning of the week that the team was in good spirits, and we were in good shape and felt great. I’m glad the match turned out the way it did and that we succeeded.”

Dlouhý and Vízner lost their singles matches on Sunday, some consolation for the Belgians in the best-of-five series. The Czechs will face Russia in the quarterfinals.

Cross-country skiing: Bauer triumphs in Estonia to add to lead in standings 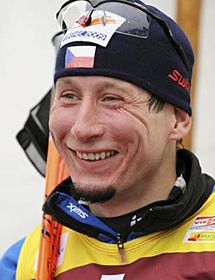 Lukáš Bauer, photo: CTK Cross-country skiing star Lukáš Bauer extended his lead in the World Cup standings by clinching a win in Otepaa, Estonia on Saturday in the men’s classic style 15 kilometres. Bauer led from start to finish, completing the race in 39 minutes 29.4 seconds for his third win of the season. Estonia’s Jaak Mae was second, 13.7 seconds behind. Bauer tops the World Cup standings with 916 points, far ahead of the rest of the field. Germany’s Rene Sommerfeldt is 2nd with 621 points. 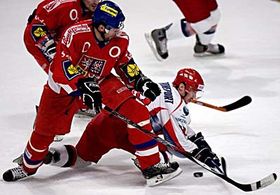 Photo: CTK The Czechs finished last in the Euro Hockey Tour, notching up just one win in three games. In the series the Czechs lost to the Finns, once to the Swedes. The first game was a blow-out with the Czechs declassed 6:1, the game against the Swedes ended 4:2. The sole win, surprisingly came against an otherwise unbeaten Russia. In the match the Czechs came from a 1-nil down in the 1st period to explode in the 2nd, scoring 4 goals in a row in a 13-minute stretch. The Russians were able to pull within two in the 3rd, but that was how the game ended.

Czech forward Milan Hejduk scored twice and Jaroslav Hlinka notched as assist for the Colorado Avalanche against the Vancouver Canucks on Saturday, helping their team to a 6:2 victory. Hejduk now has 20 goals this season. The win was the Avalanches 4th in six games, keep the Avalanche a point behind division leaders Minnesota.

On Sunday the Toronto Maple Leafs got the better of the Detroit Red Wings’ Dominik Hašek: then goalie was beaten 62 seconds into overtime on a shot redirected by Nik Antropov. The Red Wings lost 3:2.

A German TV crew was robbed during a World Cup ski jumping event in Liberec, north Bohemia on Sunday. The news was released by a International Skiing Federation spokesperson. It has been specified that perpetrators stole a number of laptop computers, a camera, as well as cash from the crew’s rooms at a local hotel. Also robbed were two federation officials. Damages have been estimated at several hundred thousand crowns. A representative of the hotel where the incident happened said the guests would be compensated for the stolen property.