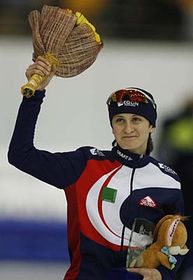 Martina Sáblíková, photo: CTK The speed skater Martina Sáblíková was named Czech Sportsperson of the Year at a ceremony in Prague on Saturday night. Sáblíková is only 20 but already she has twice been crowned world champion and holds the world record in the 5,000 m. What’s more, her success has been achieved against great odds, given that she comes from a country with no tradition of speed skating and no venue for the sport – in fact, she used to train on frozen fish ponds.

In what was the closest poll of Czech sports journalists in the 49-year history of the award, she finished just ahead of world javelin champion Barbora Špotáková and slalom world champion Šárka Záhrobská. Martina Sáblíková couldn’t attend the ceremony as she was competing in Russia, but second-placed Barbora Špotáková described the atmosphere: 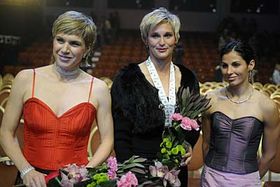 Kateřina Neumannová, Barbora Špotáková and Kateřina Baďurová, photo: CTK “I was extremely tense because I really didn’t know the results. Obviously a lot of people here did know the winner, but I didn’t. So I was really nervous – almost to the point of fainting!”

Barbora Špotáková was one of five world champions on the ten-name shortlist for Czech Sportsperson of the Year, and also one of the five women in contention.

Martina Sáblíková is now on her way back from Russia’s Kolomna, where she came first in the 3,000 and 5,000 metres and took the bronze in the four-discipline category at the speed skating European championships. 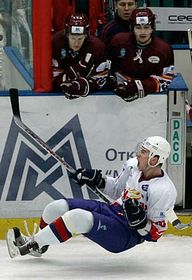 Photo: CTK Sparta Prague ice hockey club were also in action in Russia on Sunday, when they faced Magnitogorsk in the final of the Super Six European club championship in St Petersburg. Sparta put up a good fight against the Russians, before succumbing in the third period. But at least one Czech was happy after the game: Jan Marek scored two goals and made two assists for Magnitogorsk on their way to the trophy.

Vaidišová eases into second round at Australian Open 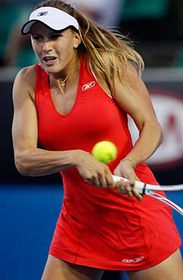 Nicole Vaidišová, photo: CTK The Czech women’s tennis number one Nicole Vaidišová made light work of Raluca Olaru in the first round of the Australian Open, beating the Romanian 6-3 6-0 in Melbourne on the opening day of the first Grand Slam of the year.

Čech triumphs in Premier League battle of the Czech goalkeepers

There was Czech interest in Saturday’s English Premier League game between Chelsea and Tottenham Hotspur, with both teams featuring goal-keepers from this part of the world. It was Petr Čech who came out on top: he kept a clean sheet as the Blues put two goals past Radek Černý in the Spurs goal. Former Slavia Prague man Černý has been an understudy at Tottenham for three years but has recently received considerable media attention since replacing Paul Robinson. However, he says he has been told his contract will not be renewed in the summer.