Sparta come out on top in ice hockey derby... 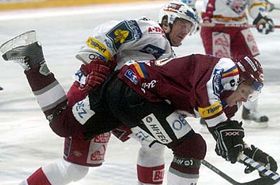 Sparta - Slavia, photo: CTK The biggest game in the 30th round of the Czech ice hockey Extraliga on Sunday was what's known as the Prague "S" derby, with Sparta playing host to city rivals Slavia. Sparta scored four goals in the second period, a lead which proved unassailable; Slavia could only manage two in reply, as the game finished 4:2. So it is Sparta fans who have bragging rights today - and so far this season: the club have won two of the three Prague derbies so far this season.

Sparta goaltender Tomas Duba had problems with his skates and the club's number two goalie had to fill in for the first few minutes of the game. Duba explains.

Sparta - Slavia, photo: CTK "One of my skates broke when I went onto the ice: the rivets fell out...I had to change my skates really quickly. But luckily I was able to start in the fourth minute. The atmosphere was fantastic and both sets of fans were really urging their teams on - it's great to play against such a backdrop. I'm really happy we won."

Sparta Prague are third in the Extraliga with 50 points, behind Ceske Budejovice with 51 and Liberec with 53. Slavia are 10th.

...while Slavia (at least briefly) go top of football league 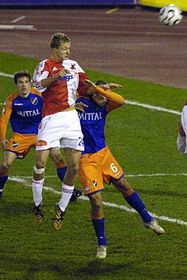 Slavia's Tomas Necid scores the winning goal, photo: CTK But it's not all bad news for Slavia fans. In the Czech football league Slavia are currently first, after a 2:1 win over Banik Ostrava on Sunday. The winning goal came from 17-year-old Tomas Necid in time added on. Necid is one of a number of promising young players who have lifted Slavia to top spot, after a sluggish start to the season. However, they could be overtaken by Sparta on Monday evening: they were due to play Kladno after the recording of this programme. 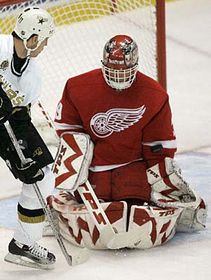 Dominik Hasek, photo: CTK The great Czech hockey goaltender Dominik Hasek appears to be closing in another career milestone. The Dominator notched up the 72nd shutout of his career in Detroit Red Wings 3:0 win over Minnesota on Friday. That leaves him just one short of joining the top ten goaltenders in NHL history in terms of games without conceding. At 41, however, Hasek is unlikely to equal the all-time record of 103 shutouts. 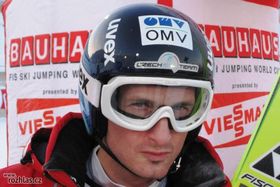 Jakub Janda Czech ski jumper Jakub Janda has gotten off to his poorest start in three seasons: after three rounds of the World Cup, last year's champion lies in 31st place. Janda came 16th and 23rd over two days in Lillehammer at the weekend, somewhat down the field but still an improvement on his first two events of the season.