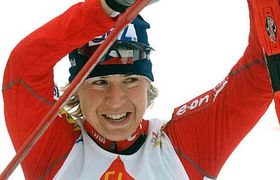 Katerina Neumanova, photo: CTK Without question it was a remarkable weekend for Czech skiing: on the eve of the new year and a new Olympic season: on Saturday Czech skier Katerina Neumanova confirmed top form in the Women's 10 kilometre freestyle on the World Cup circuit in Moravia's Nove Mesto. Urged on by Czech fans, Neumanova set a blistering pace, displaying confidence and reserve strength, adding in intensity after the halfway mark. Neumanova, who hadn't raced since November, once again proved she still has what it takes six weeks ahead of the Winter Olympics. She outclassed her nearest rival Russian skier Cepalova by a remarkable 26.2 seconds - to win in Nove Meste na Morave and retain her crown from last year. 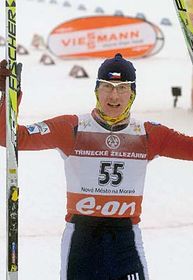 Lukas Bauer, photo: CTK In men's cross-country, Lukas Bauer also had an excellent race, finishing 2nd in the Men's 15 km freestyle, roughly 8 seconds off the leader Frenchman Vittoz. Bauer came off antibiotics just days before and was more than satisfied with his finish in a race he won back in 2003. 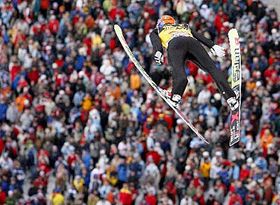 Jakub Janda, photo: CTK But, surely the most exciting win at the weekend came in ski jumping, with the currently dominant Jakub Janda outperforming all rivals in the 2nd stage of the prestigious Four Hills competition, held at Garmisch-Partenkirchen. Janda just edged past rival, Finland's Janne Ahonen, with jumps of 125 and 121.5 metres to become the first Czech to win a Four Hills stage since 1986. Afterwards, the 27-year-old had this to say:

"It was a very tense situation, and I was very nervous. I guess my 2nd jump didn't quite come out the way I wanted but in the end it's great that it was enough, that I succeeded. It's a great feeling."

The win is Janda's 5th victory on the World Cup this season. The next stop on the Four Hills tournament will be in Innsbruck on January 4th. Czech fans will be hoping Janda can keep up the remarkable pace: the only Czech to ever win the Four Hills title was Jiri Raska way back in 1971. 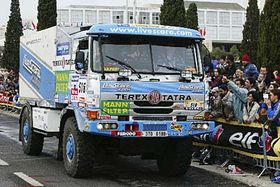 Tomecek's Tatra, photo: CTK For rally driver Tomas Tomecek and crew the famous Dakar rally is all but over in the truck class, after Tomecek lost control and crashed his team's Tatra, flipping it on its side. The truck lay out of commission for an entire day, knocking Tomecek and his crew down the list, for all practical purposes out of contention. The crash came on the 45th kilometre of the 115 kilometre-long stage, blocking the route: trucks that followed either had to wait, or find a way around. Karel Loprais, the most famous of Czech Dakar racers, was unaffected though: his vehicle was ahead of Tomecek's team when the driver lost control. 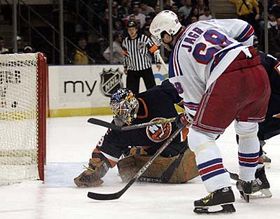 Jaromir Jagr, photo: CTK In ice hockey, star forward Jaromir Jagr has continued his remarkable season, scoring once and assisting fellow Czech Martin Rucinsky to bring the New York Rangers back against his old team Pittsburgh on New Year's Eve. Czech Martin Straka had an assist. Jagr's goal and assist were enough to keep the player atop the NHL's offensive leaders' points list at 61 points, but were not often to give New York the win. New York lost to Pittsburgh in overtime 4-3.