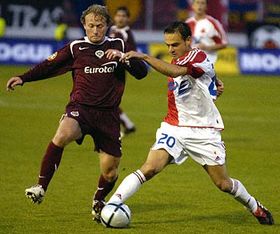 Sparta - Slavia, photo: CTK It took six long years but Slavia Prague have finally beaten fierce rivals Sparta in the biggest game in Czech league football, the Prague "S" derby. Slavia got off to a slow start at Strahov on Sunday evening, going 1:0 down after four minutes and then missing a penalty. But the hosts got one goal back in the first half, and then scored three in quick succession in the second to run out 4:1 winners and become - for now at least - kings of the city. Here's Slavia boss Karel Jarolim, who in his playing days appeared in many Prague derbies for the club. 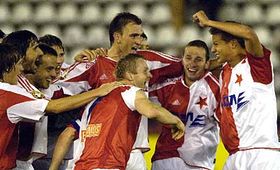 Slavia, photo: CTK "We didn't start well, we were chaotic, but the turning point came when we equalised after half an hour. Then we started playing the way we wanted to play from the start - we were more aggressive, more active and we punished their mistakes in defensive. So I'm totally satisfied with the second half performance."

Karel Jarolim's opposite number Stanislav Griga also experienced many a Prague derby in his day, as a Sparta player. But this is one clash he won't remember fondly.

"We learned two unpleasant things during this game. The first is that in the second half we weren't up to it physically, either in terms of running or aggression. And the second thing is our defense - it wasn't the first time it's happened, but we really showed a lot of shortcomings at the back."

Czech international Marek Jankulovski started his first league game with Italian giants AC Milan, helping them to a 2:1 victory over Palermo on Sunday. Jankulovski, who started his career at Banik Ostrava, joined Milan from Udinese in the summer. 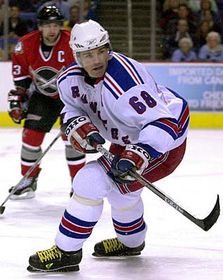 Jaromir Jagr, photo: CTK Some of the Czech Republic's biggest stars are going great guns in the NHL at the moment. Forward Jaromir Jagr has been showing just why he's the best-paid player in the world: Jagr is scoring goals regularly for the New York Rangers, and leads the points table.

Meanwhile, goaltenders Dominik Hasek and Tomas Vokoun are both undefeated with Ottawa and Nashville; they're the only unbeaten clubs in the league.

Slavia stay way out in front in Czech Extraliga 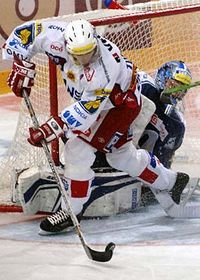 Slavia - Pilsen, photo: CTK In Czech hockey's Extraliga Slavia Prague are still way out in front: they're a full 11 points ahead of the pack despite only drawing 0:0 with Pilsen in the 17th round on Sunday. Vitkovice are in second place, followed by Zlin in third. 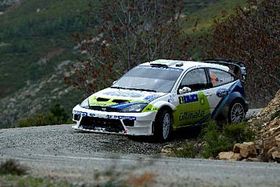 Roman Kresta, photo: CTK Czech driver Roman Kresta has notched up the best result ever by a Czech in the World Rally Championship; Kresta, who is 29, came fifth in the Corsica Rally on Sunday, but says he is still afraid of losing his place in the Ford team for next season.