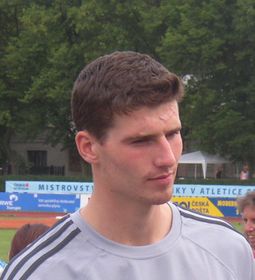 Jaroslav Baba One of the great hopes of Czech athletics, high jumper Jaroslav Baba, has taken gold at the European Under 23 Championships in Erfurt, Germany. Baba won the event on Sunday with a jump of 229 cm, some way short of his Czech record of 237 cm. But the 20-year-old from north Moravia was still satisfied.

"It was a long competition, and it was really sunny, which I don't like too much. I made a few mistakes but I'm still pleased with the result. Winning the Under 23 title means a lot to me - it was my last junior event. From now on I'll just be taking on seniors!"

Jaroslav Baba took bronze at last year's Olympics and is definitely one of the Czech athletes to watch out for at next month's World Athletics Championships in Helsinki. By the way, he has postponed his "maturita" school leaving exams until after the championships.

Olomouc achieve 1:1 Intertoto draw at Dortmund thanks to Koller own goal 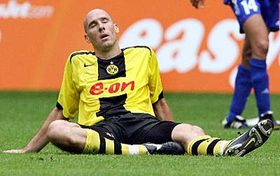 Jan Koller, photo: CTK Sigma Olomouc stand a very decent chance of progressing to the semi-finals of football's Intertoto Cup, after a 1:1 away draw against Borussia Dortmund on Saturday. What's more, Olomouc's goal was scored by Czech international Jan Koller; the giant Dortmund striker was back defending a free kick and turned the ball into his own net. Here's Olomouc manager Petr Ulicny.

"We're satisfied - 1:1 is a good result going into the second leg. I have to pat our players on the back - they played well tactically and the defence was solid. And I'm really pleased that in that environment, in front of around 40,000 Dortmund fans, we had three chances to score. So I'm satisfied."

Sparta Prague have given a new one-year contract to Jan Simak, one of the most talented but troubled Czech players of his generation. He notoriously quit football a couple of years back, going AWOL from Germany's Bayer Leverkusen. Simak made little impact during his first season at Sparta, and failed to turn up for pre-season training. But the club have surprised many by retaining the midfielder - on condition that he gets treatment for an addiction to alcohol.

Many Czechs to return to NHL, but wage conditions mean some may stay home

The deal to end the lockout in ice hockey's NHL may not be all bad news for the Czech Extraliga, which played host to many homegrown stars last season. Yes, around 60 Czech players will return to North America, with Ceske Budejovice alone set to lose 7 members of their squad. But lower wages agreed under the NHL collective agreement mean some Czechs may prefer to stay at home. Defender Jiri Slegr, for instance, says he is content to remain with Litvinov.