The doubles decider, however, didn't go the Czech Republic's way, with the Italians winning 6-4 6-4. Peschkeova and Vaidisova were picked for that final match, with Vaidisova taking the place of Iveta Benesova, who had been expected to play in the doubles. Czech coach Tomas Petera explains his decision.

"I decided on those two players, not because Iveta hasn't been playing well, but because of how Nicole played in the singles. Iveta hadn't 'warmed up' and Nicole is in such great form at the moment. Her serving and returns are so good - she can only add to the doubles pair."

Upcoming Czech men's player Tomas Berdych gave French Open champion Rafael Nadal a run for his money on Sunday, when he beat the Spaniard 6-2 in the first set of the final of the Swedish Open. But it wasn't to be Berdych's day - he lost the next two sets 2-6 4-6. 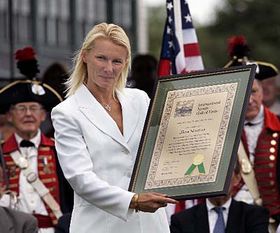 Jana Novotna, photo: CTK Jana Novotna, winner of Wimbledon in 1998, has been inducted into the International Tennis Hall of Fame in Newport, Rhode Island. The Brno-born player earned over 10 million dollars in a 13-year professional career. 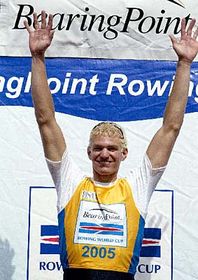 Ondrej Synek, photo: CTK What a debut season it's been for Czech rower Ondrej Synek. The 22-year-old made a big splash by winning the first men's single skull World Cup race of the season in England's Eton. Synek has managed to maintain that form, taking gold in the World Cup finals on Sunday when he came first in Lucerne, Switzerland.

With just a month to go now until the Athletics World Championships in Helsinki, leading Czech high-jumper Jaroslav Baba is showing some fine form: he equalled the Czech outdoor record at Rome's Golden League meeting on Friday with a jump of 236 cm. The 20-year-old from Karvina in north Moravia set the Czech indoor record - 237cm - earlier this season.

Czech Under 21 football captain Vaclav Sverkos could be moving up in the world. There have been reports Stuttgart are keen to sign the striker, who has made an impression in the Bundesliga in his two years at Borussia Monchengladbach.