In Sports News: success for Czech canoeists at the European Championships in Slovenia; Kvetoslava Peschkeova is the only Czech to make it past the third round at Wimbledon; and after recovering from leukemia Vaclav Kalousek denies suggestions from Slavia Prague's manager that he is finished in top football. 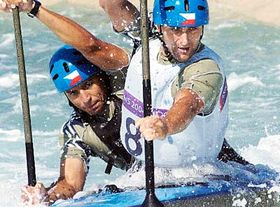 "As usual the race here in Tacen was a bit of a lottery. The water here is rough and on top of that it was windy - in fact the race was delayed for half an hour. Of course the result more than made up for that, and we're delighted with our win. Becoming European champions means a lot to us - I guess I'd rank it just after our bronze from last year's Olympics."

Second after Stepanek and Volf in the C2 were fellow Czechs Marek Jiras and Tomas Mader. The best known Czech canoeist, Stepanka Hilgertova, finished second in the K1 category; third was Irena Pavelkova, also of the Czech Republic.

Peschkeova only Czech singles player into week two at Wimbledon 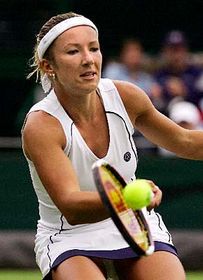 Kvetoslava Peschkeova, photo: CTK The only Czech singles tennis player to reach the second week at Wimbledon was Kvetoslava Peschkeova, who beat Spain's Conchita Martinez in the third round. The Czech was due to play Nadia Petrova of Russia in the fourth after the recording of our programme. Peschkeova, nee Hrdlickova, is 29; she's made something of a late return to top tennis after a series of injuries.

Czech men's number one Radek Stepanek was knocked out of Wimbledon by Scottish teenage Andy Murray, much to the delight of local fans. And Jiri Novak went out to Max Mirny of Belarus.

Novak, by the way, is momentarily changing sport - he's currently training with ice hockey star Jaromir Jagr's Jagr Team, which the famous forward puts together every summer for exhibition games.

Kolousek rejects suggestion he is finished in top flight football

An unfortunate controversy concerning Vaclav Kolousek, one of the most talented midfielders in the Czech football league. Kolousek recovered from leukemia last year but after his comeback did not make many appearances for club Slavia Prague. What's more, the player has taken Slavia to arbitration over unpaid bonuses. Now manager Karel Jarolim has suggested Kolousek no longer has what it takes to play top class football, allegations the latter describes as unfounded and humiliating. Whatever happens, it seems unlikely he will play for Slavia again.

Slavia Prague made international sports headlines last week, when they protested UEFA's decision to give Liverpool a seeded place in the Champions League qualifier. As a result Slavia have lost their seed, meaning they could face much tougher opposition in the final qualifying round. The cash-strapped Prague club have never reached the lucrative Champions League - getting in could make their future a lot brighter.