In Sports News: Czech ski jumper Jakub Janda wows the home crowd in the north Bohemian resort of Harrachov, reaching the podium for the third weekend in a row; in football Slavia Prague avert a crisis, finding the money to pay players threatening a mass walkout; Patrik Elias is set to leave the Czech ice hockey league, where Ladislav Lubina sets a new appearances record of 847 games. Jakub Janda, photo: CTK Czech winter sports have a new star in ski jumper Jakub Janda, who wowed the home crowd in the north Bohemian resort of Harrachov at the weekend. Janda had been in the lead for the first time in his career after Sunday's first round, but ended in third place - his third time on the podium in the last three weeks. On Saturday Jakub Janda had finished fourth, and is now second overall in the World Cup standings. The ski jumper is clearly pleased with the upturn in his career.

"It was another of the most beautiful weekends of my life, and I hope I have more weekends like that! For me coming third is always great - even getting in the top ten is a great result, so I'm satisfied."

Jakub Janda had a better weekend than Czech cross country skier Katerina Neumannova, who suffered her first big defeat of the season, coming 12th in the first World Cup skiathlon event (skiathlon is a combination of classic and free cross country skiing). Neumannova said she had been too busy to train in the last two weeks.

There has been turmoil at Slavia Prague football club, where many of the club's players had threatened to walk out if wage arrears were not paid by Friday. But Slavia's management came up with the estimated 15 million crowns needed, averting a crisis for now at least. Meanwhile, work continues on the new Eden stadium which Slavia fans have been promised for years. 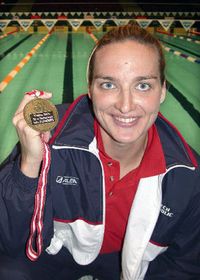 Ilona Hlavackova, photo: CTK Following the departure of Jaromir Jagr for Omsk, the Czech ice hockey Extraliga is losing another megastar, with Patrik Elias set to play for Russia's Magnitorsk from January. And Milan Hejduk says he too will "go East" if the NHL season does not begin.

Ladislav Lubina on Sunday set a new Extraliga appearances record of 847 games. Lublina celebrated with a goal for Jihlava, though his team went down 3:2 to Vitkovice. Sparta Prague are still leading the table on 66 points, two ahead of Zlin, who are followed by Slavia on 55.

Czech swimmer Ilona Hlavackova took bronze in the 50m backstroke at the European short pool championships in Vienna on Saturday. Hlavackova said she was satisfied with third place, after cutting back on training to concentrate on her studies. The leading Czech men's swimmer, Kvetoslav Svoboda came 17th in heats for the 200m freestyle. He had competed despite collapsing after the 400m two days earlier.