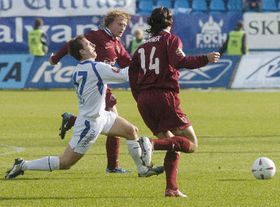 Sparta Praha - Banik Ostrava, photo: CTK On Saturday football club Sparta Prague faced defending champion Banik Ostrava at Banik's stadium in east Moravia, a highly touted match that was unfortunately preceded by hooliganism and racist taunts from Sparta fans. Five were arrested for chanting racist slogans, putting up violent resistance before being taken into custody. The stadium also saw clashes between hardcore Sparta and Ostrava fans marring what was otherwise an impressive game and feisty performance by Sparta to sink the home side 2:0.

Young gunner Tomas Jun scored both goals, one just before half time, the 2nd in the 71st to put the match beyond Ostrava's reach.

The win keeps Sparta with some jump at the top of the table: four points ahead of their nearest rivals Olomouc, who keep stride with Sparta thanks to a weekend win over Brno.

In hockey action perhaps the most notable game of the weekend was Pardubice's 5-1 romp over Vitkovice that saw memorable moments from NHL stars Jan Bulis, who plays for Montreal, and Milan Hejduk, of Colorado, each beating Vitkovice's goalie Jan Lasak. Pardubice scored three goals before Vitkovice even answered with its lone goal of the match from Vujtek.

Even so, Vitkovice had chances to get back in the match, but suffered two more goals in the third to put the game miles out of reach.

The Czech Republic has a new rally racing champion and his name is Jan Kopecky. At 22 he is the youngest champion in Czech rally history, winning on Saturday in Trebic with a time of 1:45:47, approximately 27 seconds off his nearest rival Vaclav Pech. Pech is second in the overall standings but can obviously no longer threaten for the lead. Pech was the country's rally champion last year.