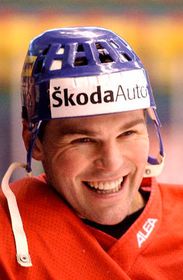 Jaromir Jagr, photo: CTK A little less than two weeks before the 68th Ice Hockey World Championship kicks off in Prague and Ostrava New York Ranger's star Jaromir Jagr has returned home to train with the national team. Jagr arrived in Prague on Sunday telling reporters that his goal was no less than helping his team clinch the gold this year. Jagr said it was clearly the last chance he would get to play in a championship at home as it were, while commentators noted after a dismal season in the NHL the famous right-winger was hungry to win.

And on Monday the Czechs will play in a warm-up match against France in the spa town of Karlovy Vary. Jagr and some other major players won't be in the game, but coach Slavomir Lener told Czech Radio the team was taking the match seriously nevertheless.

"Of course it's a match that should start us up. Every game is important for us, it's important to win every game, to feel good about it and be active, and to use it to gain momentum for the matches ahead." 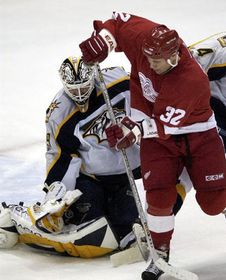 Tomas Vokoun and Steve Thomas from Detroit Red Wings, photo: CTK Speaking of winning the first-round of the NHL play-offs is well under way and Czech goalie Tomas Vokoun has been keeping it respectable for his Nashville Predators: this against the hockey powerhouse known as the Detroit Red Wings. The 27-year-old goalie, playing in his first NHL playoff series ever, humbled Detroit on Sunday in a 3-1 victory, stopping no less than 41 shots. The outspoken goalie's first play-off win puts the Nashville Predators back in the series - they still trail Detroit but only by 2-1.

Finally in NHL action Monday yet another Czech was instrumental in his team's win - none other than Patrik Elias of the New Jersey Devils. A loss would have seen New Jersey slip three games behind Philadelphia, but Elias made the difference in the clutch, scoring two goals including the game winner. Thanks to his and his team's play, Philadelphia now only leads the series by 2-1. 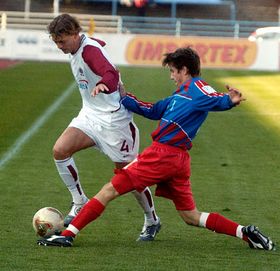 Sparta Prague - Pilsen, photo: CTK Sparta Prague's fortunes seem to be turning around in the Czech First Division and fans have once again begun to believe. Their team has begun inching back up the chart to vie for a better finish this season. Over the weekend Sparta downed Pilsen 2-1. While not a pretty victory, the win leaves an opening for Sparta to challenge league-leaders Ostrava Banik, who are six points ahead. Sparta now sit in fourth place, at 45 points like Slavia, just one point off second-place Olomouc. Luckily for Sparta all three competitors only managed ties at the weekend leaving the field vulnerable if Sparta can manage an end-of-the season surge. 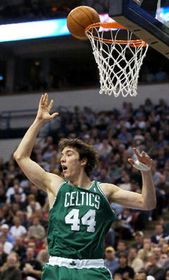 Jiri Welsch, photo: CTK Czech basketballer Jiri Welsch will make history by becoming the first Czech to ever make it to the post-season play-off round in the NBA. Welsch, who plays for the Boston Celtics helped his team secure an 8th and final spot in the Eastern Conference, something it wouldn't have been able to achieve had Philadelphia not played equally poorly coming up on the end of the season. The Celtics, though, are through and Welsch will achieve what another Czech player, Jiri Zidek, could only dream about.