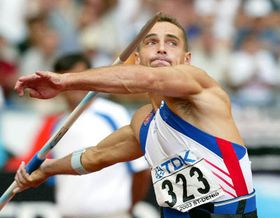 Roman Sebrle, photo: CTK It hasn't been a great week for Czech sport, with only one Czech medal so far at the World Athletics Championships in Paris. That medal was a silver in the decathlon for Roman Sebrle, who went to Paris hoping for no less than first place. The world points record holder would probably point to the javelin as the discipline where he lost the gold: after one of the longest throws of his career Sebrle's momentum carried him past the starting board, and the throw was disqualified; in the end he was over 100 points behind winner Tom Pappas of the United States. Sebrle, who suffered a minor illness a couple of weeks before the championships, tried to keep his chin up on Wednesday evening:

"I said I would be satisfied with a win because I was first in the world rankings but nobody can ever say I'm going to win, as was proven here. I expected my form would be better - maybe that virus took a bit of energy out of me. But that's sport for you, and a silver medal isn't bad, is it? It's motivation for the next World Championships!"

The Czech three times world decathlon champion Tomas Dvorak came fourth in Paris, after finishing the event with the fastest 1,500 metres of his career. Dvorak, who has suffered injury problems in recent years, looked happier than Sebrle; perhaps he hadn't expected to do so well in what was his first decathlon this year.

Muzik disappointed after failing to even reach final in 400m hurdles

Elsewhere few Czech athletes can have been as disappointed in Paris as 400 metres hurdler Jiri Muzik, who failed to even reach the final. Muzik was hoping to build on his silver success at the European Championships last year, but it wasn't to be. Fellow Czech Stepan Tesarik also fell at the semi-final stage. Vera Pospisilova came fifth in the discus, while promising young high-jumper Jaroslav Baba was 11th. Czech fans will be hoping Jan Zelezny can take a second medal for the country in the javelin in Sunday's final.

Sparta Prague have drawn Chelsea, Lazio and the Turkish side Besiktas in the group stage of the prestigious Champions League. Sparta cut qualification for the competition fine, drawing 2:2 at home with Vardar Skopje on Tuesday; that was enough to advance after a 3:2 win in the first leg. Vardar's manager said that all that separated the two teams was Karel Poborsky and it's true the midfielder did the business for Sparta, scoring three goals over the two legs, including an absolute blinder of a volley in the second game. 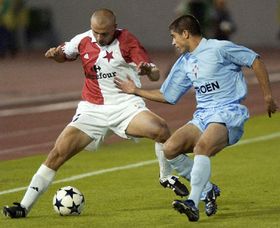 Slavia Prague - Celta Vigo, photo:CTK Spare a thought, though, for Slavia Prague. They were attempting the almost impossible, turning around a 3:0 score-line from their first leg game against Spain's Celta Vigo. They certainly put up a good fight in Prague on Wednesday, and were leading 2:0 after only 30 minutes, but try as they might they just couldn't get a third, and failed once again to reach the Champions League.

Czech captain Pavel Nedved moved a step closer to being named European Player of the Year when he was named best midfielder in the Champions League last season.

There are two Czech tennis players left at the US Open as the last Grand Slam tournament of the year approaches the end of its first week. Radek Stepanek is into the third round at Flushing Meadows for the first time in his career, after beating Farbice Santoro of France 6-2, 6-4, 6-7, 6-3. He next faces Australian Lleyton Hewitt. Meanwhile, it took tenth seed Jiri Novak five sets to beat Mario Ancic of Croatia in the first round; he faces Jan-Michael Gambill of the United States in the second.