We begin today with athletics, and the World Championships in Paris, which get underway next weekend. Hurdler Jiri Muzik, who took silver at the European Championships last year, is hoping to repeat that success on the world stage. On Friday Muzik, who is 26, came first in the 400 metres hurdles "B" race at the Golden League meeting in Zurich, in a time of 48.87 seconds. He says he is pleased with how his preparations are going ahead of the Paris meeting:

"I can be satisfied, definitely. Things are getting better ahead of the World Championships, and should culminate there, so I hope it goes well. Everything will be different there, the atmosphere is really specific. I feel tired but I'll rest. I think things can only get better and will really improve a lot."

Zelezny and Kasparkova stay in Czech team for Paris

There was good news for Czech athletics fans when javelin legend Jan Zelezny, who took gold in Zurich, announced he would be in the Czech team for the World Championships. Zelezny will be hoping to take the fourth world title in what has been an incredible career. Triple-jumper Sarka Kasparkova has also announced she is going to Paris, despite problems with her back.

Rossi wins motorcycling Grand Prix in front of 75,000 in Brno 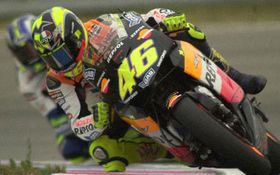 Valentino Rossi and Sete Gibernau, photo: CTK The 75,000 fans who turned out for the Czech Motor Cycling Grand Prix in Brno on Sunday were treated to a thrilling race, as Italian world champion Valentino Rossi overcame Spain's Sete Gibernau by the narrowest of margins. The two rivals went wheel-to-wheel for most of the race, but Rossi out-braked Gibernau on the final corner to finish just in front. 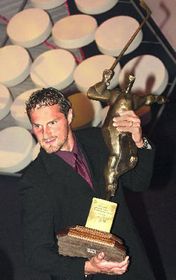 Milan Hejduk with the Golden Hockey Stick, photo: CTK Milan Hejduk has been presented with the Golden Hockey Stick for Czech ice hockey player of the year. It's the first time Hejduk, who plays for NHL club Colorado, has won the award. You may recall the 27-year-old was the highest scorer in the regular NHL season, with an impressive 50 goals. Second in the Golden Stick poll was Martin Havlat of Ottawa, followed by New Jersey's Patrik Elias. Jaromir Jagr, last year's winner, came sixth.

Only Czech in NBA Jiri Welsch on the move

The only Czech player in basketball's NBA is on the move: Jiri Welsch is leaving the Golden State Warriors for the respected Dallas Mavericks as part of an eight-player deal. The move is seen as a big step up for Welsch, who last summer became only the second Czech ever to make it to the NBA. 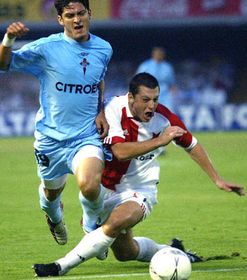 Edu (Celta Vigo) - Tomas Hrdlicka (Slavia Prague), photo: CTK What a bad week it's been for Slavia Prague's footballers. After losing to Spain's Celta Vigo in a Champions League qualifier in mid-week, on Saturday they lost 2:1 to a much less glamorous team, first division new boys Plzen. Plzen, by the way, are managed by former Slavia man Frantisek Cipro. Elsewhere league-leaders Brno beat Zizkov 2:1, while Ostrava impressed in a 5:2 win over Blsany.

Erstwhile Czech international Patrik Berger had a dream start at his new club Portsmouth on Saturday. After a season out in the cold at Liverpool, Berger helped create Portsmouth's first goal before crowning his debut with the winner.