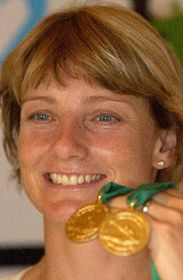 Stepanka Hilgertova, photo: CTK The Czech Republic topped the medals table at the World Water Slalom Championships at Augsburg, Germany, with three golds, a silver and a bronze; it was the country's most successful championships since 1969. Two-time Olympic winner Stepanka Hilgertova took her second world championships gold on Friday, marking a return to the top for the Czech kayaker, who wasn't too fazed by her latest success:

"The course here isn't the most difficult and the current isn't as strong as in some places. On the other hand, the course has the most twists and turns and is maybe the trickiest too. So, even though my performance wasn't one hundred percent, it was good in the circumstances and I'm satisfied."

Stepanka Hilgertova also took gold in the women's kayak team event, along with Vanda Semeradova and Irena Pavelkova. The third gold for the Czech Republic came in the men's C2 team event. 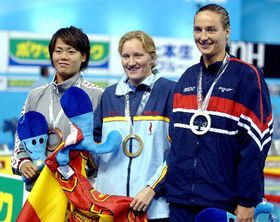 Ilona Hlavackova (in the middle), photo: CTK Staying in the water, swimmer Ilona Hlavackova also has something to celebrate at the moment. Her silver in the 50 metres backstroke at the World Swimming Championships in Barcelona makes her the first ever Czech to win a medal in the competition. The 26-year-old also broke the Czech record for the third time in two days in Thursday's final, and was in jubilant mood afterwards:

"Of course it's a joy, because it's the greatest success in the world - for me (laughs). I'm wearing the medal around my neck right now, it's pretty heavy and I'll feel the weight on my chest for the rest of my life."

Sparta held to draw as new football season kicks off 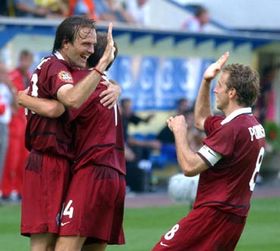 In the draw for the Champions League qualifiers, Sparta look set to face tough competition in Russian league leaders CSKA Moscow. If Slavia beat Bosnian side Trebinje, they too face a tough draw: Spain's Celta Vigo.

Liberec and Brno hoping to reach UEFA Cup via Intertoto

Czech clubs Liberec and Brno have kept their hopes of UEFA Cup action alive by reaching the penultimate stage of the Intertoto Cup. Liberec knocked out Santander, with goal-scorer Vaclav Kolousek somehow managing to escape with a yellow card after punching the Spanish side's goalkeeper in the face during Saturday's second leg. Liberec face Schalke in the semi-finals, while Brno - who knocked out France's Guingamp - play Villareal of Spain.

The police have recommended that the state attorney file charges against ice hockey goalie Dominik Hasek, following a brutal attack on an opponent in the amateur sport of in-line hockey. The state attorney is due to reach a decision in the next fortnight on whether to prosecute Hasek, who recently rejoined NHL club the Detroit Red Wings.