The Czech Under 19 football team beat England on Sunday to win a semi-finals place at the European Championships. The Czech women's tennis team have made sure of their place in next year's Fed Cup World Group, thanks to a play-offs win over South Africa in Durban. Meanwhile, swimmer Yvetta Hlavacova says a whole year's hard work has gone down the drain, after coming 11th in Barcelona. Vaclav Chalupa has won the Czech rowing championships for the 15th year in a row and ice hockey forward Vaclav Prospal has signed a five-year, 17.5-million-dollar contract with the Mighty Ducks of Anaheim. 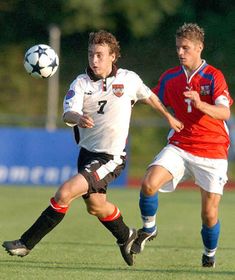 European Under 21 Championships, photo: CTK While the Czech football team lead their group in the campaign to qualify for Euro 2004, the Czech Under 19s are currently taking part in their European Championships in Liechtenstein. After drawing with France and losing to Austria, the Czech youngsters reached the semi-finals - and a guaranteed medal - by beating England on Sunday. Coach Michal Bilek was pleased with his team's performance:

"I'm satisfied because we won 3:0 and reached the semi-finals, but I think it was a thoroughly deserved victory. Our approach was not to let the other side play, to attack and go forward. We based our game on a really tight and excellent defence, and didn't give the opposition a chance. And not only did we get three goals, we created two or three more chances, so it really was a deserved victory."

After being thrashed by the Williams sisters of the United States earlier in the year, the Czech women's tennis team have made sure of their place in next year's Fed Cup World Group, thanks to a play-offs win over South Africa in Durban at the weekend. Klara Koukalova and Barbora Strycova were the only players fielded by the Czech Republic, who won 4:1 against a South African team which included the experienced Amanda Coetzer. 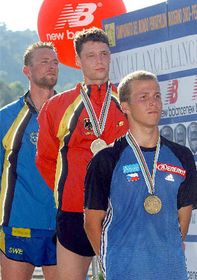 Disappointment for swimmer Hlavacova in Barcelona

But while the Czech Fed Cup team were celebrating, there was great disappointment for Yvetta Hlavacova at the Swimming World Championships in Barcelona. Hlavacova came 11th in the gruelling 25 kilometre race in a time of five hours and 41 minutes. She said after Saturday's race that a whole year's hard training had gone down the drain.

Swimming was just one of the disciplines which Michal Michalik had to take part in on his way to a bronze medal at the Modern Pentathlon World Championships in Italy at the weekend. The sport also consists of shooting, fencing, show-jumping and running. Michalik's compatriot Michal Sedlecky, who took gold last year, could only manage 13th place this time round. There was some consolation for Sedlecky, however, as he, Michalik and Libor Capalini came third in the team event. 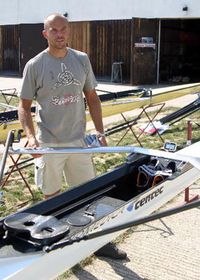 But staying in the water for a moment, the leading Czech rower Vaclav Chalupa of the Dukla Prague sports club has won at the national championships for the fifteenth year in a row. For Chalupa the Prague race was in many ways a mere training session ahead of the sport's world championships in Milan next month, which also determine participation at next year's Olympics in Athens.

Ice hockey forward Vaclav Prospal has signed a five-year, 17.5-million-dollar contract with this year's Stanley Cup finalists, the Mighty Ducks of Anaheim. Prospal left Tampa Bay Lightning as a free agent after the best season of his seven-year career in the NHL.