Jiri Novak and Roger Federer, photo: CTK The Czech number one, Jiri Novak, has won the 550,000-Euro Swiss Open tennis tournament. Novak, who had overcome compatriot Radek Stepanek in the semi-finals, put on a sterling display to beat recent Wimbledon winner and local hero Roger Federer on Sunday. The score: 5-7 6-3 6-3 1-6 6-3. Jiri Novak had this to say after winning his first tournament this year.

"I was expecting a great match because I'm in good shape and I didn't have anything to lose against Roger because I think Roger was the big favourite for this match. He is the Wimbledon champion and now he reached the final here playing excellent tennis. I was just trying to fight and to play my best tennis and I did it." 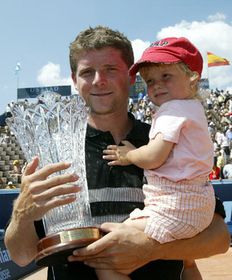 Jiri Novak and his daughter, photo: CTK It was Novak's second Swiss Open title in three years, something he partly attributes to the altitude of the tournament venue, Gstaad.

After a great run of results, the Czech Republic's volleyball team finished in fourth place at the World Series finals in Madrid at the weekend. After going out 3:0 to Brazil in the semi-finals on Saturday, Czech hopes of a bronze were dashed when they were beaten 3:1 by Italy a day later.

The Czech Republic notched up a success on the first day of the Swimming World Championships in Barcelona, when Jana Pechanova took silver in the 5 kilometre race in a time of 57 minutes, 3.9 seconds. Pechanova said she was extremely happy after Sunday's race, which took place in Barcelona bay.

Three years after taking silver at the Olympics in Sydney, Czech boxer Rudolf Kraj has taken another major medal, this time a bronze in the 81 kilogramme category at THE World Boxing Championships in Thailand. The 25-year-old was just a few points short of beating Russia's Evgueni Makarenko to reach the final.

Roman Sebrle won the decathlon at Ratingen, Germany on Sunday, with his third best performance of the year. Jan Zelezny, meanwhile, produced his worst performance so far this season at Friday's Golden League meeting in Rome; a week after winning in Paris, the three times javelin world champion could only manage fourth place. And the former world 800 metres champion Ludmila Formanova says a leg operation she has just undergone was a success. Without the operation the runner's career would have been over. Formanova is hoping to resume training in three months and is setting her sights on the 2004 Olympics in Athens.