Czech ice hockey coach Slavomir Lener has managed to secure some of the best Czech players in the NHL for his squad for the World Championships which begin in Finland this Saturday. Milan Hejduk, who recently became the first ever Czech top goal-scorer in the NHL's regular season, has agreed to turn out for the championships, as have the likes of Robert Reichel, Martin Skoula and Martin Rucinsky. Those names will be music to the ears of Czech fans disappointed at the news that Jaromir Jagr has decided not to go to Finland.

Bad news for Briza after late return to international hockey

There was bad news however for experienced goaltender Petr Briza when the Czech squad was announced on Thursday. After being recalled to international action last year at the age of 37 - and after a break of six years - Briza did not make coach Lener's final selection. 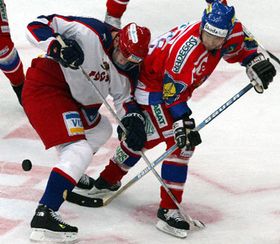 Czech Republic - Russia, photo: CTK In their latest friendly ahead of the championships the Czech Republic have finally managed to overcome their old foe and bogey team of recent years, Russia. The Czechs' 2:1 win over the Ruskies on Tuesday was their first in ten attempts; they hadn't beaten Russia since December 2001. Both Czech goals came from Josef Vasicek, who made his international scoring debut.

Czech football coach Karel Brueckner has named his squad for a home friendly against Turkey next Wednesday. There had been some speculation that Brueckner would recall West Ham defender Tomas Repka but the frequently sent-off hard man - who has recently been trying to clean up his act - has not made the squad. Midfield stalwart Tomas Galasek won't be facing the Turks either; he's out with an injury.

Czech captain Pavel Nedved, who at 30 is playing the best football of his career, scored for Juventus on Tuesday in their Champions League quarter-final win over Barcelona.

The Czech women's tennis number one Denisa Chladkova has withdrawn from the country's Fed Cup team to face the United States away this weekend in the competition's World Group First Round. Chladkova, who is 24, said she was withdrawing from the team because there had been "incomprehensible accusations and suspicions" about her participation in the team. She said the stress was affecting both her game and her personal life. In nine Fed Cup meetings the Czech Republic have only managed to beat the US twice.

Czech men's tennis player Bohdan Ulihrach has been appearing before an inquiry into traces of the banned anabolic steroid nandrolone being found in his blood. Ulihrach first tested positive for the drug last October. If the commission finds the player guilty a previously imposed two-year ban will stand.