The Czech Republic's plans to host the 2004 world ice hockey championships are in serious doubt, as a dispute arises over the building of a necessary new arena. The Czechs get off to a losing start at the Swedish Games, but good news for hockey fans comes in the form of Jaromir Jagr's 500th NHL goal. The draw is being made for this weekend's hotly anticipated Davis Cup tennis clash with Russia, and Ludmila Formanova is beset by fresh health worries. 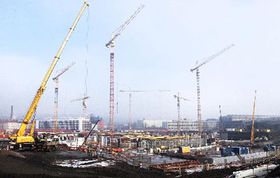 Construction of the new hockey arena, photo: CTK After first failing to build a requisite new hockey arena in time for the 2003 world championships, it now seems the Czechs may not have a new hall in time for the revised date of 2004. The reason: a dispute between the company planning to build the arena and the owners of the Prague site. The investors say they can only build the hall with a government loan, an idea rejected outright by Finance Minister Bohuslav Sobotka. Representatives of the ministry, the investor and the Czech ice hockey federation are to meet to try and find a way forward. Here's the hockey federation chairman, Karel Gutt.

"We have to have a new arena, and I'd like to explain the situation to the minister, because none of us want the state to put one crown into the arena, it's just a question of a loan which would allow us to continuewith such a large investment you have to have a loan."

The Czech Republic's ice hockey team had a losing start at the Swedish Games on Tuesday, when despite a sterling performance from goalie Roman Malek they went down 1:0 to Finland. The result leaves the Czechs two points behind the Finns on the Euro Hockey Tour table. Their next game is against hosts Sweden. 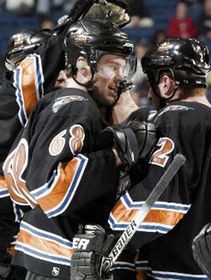 Jaromir Jagr, photo: CTK The biggest Czech ice hockey star, Jaromir Jagr, scored his 500th NHL goal on Tuesday, with a hat-trick in just 18 minutes in his Washington Capitals' 5:1 defeat of Tampa. Team-mate and fellow Czech Robert Lang asked the referee for the puck as soon as the game finished, and presented it to a very happy Jaromir Jagr.

As the search for a new Czech president gets ever more farcical, there have been calls for legendary goaltender Dominik Hasek to run. There are two problems with this idea: Hasek, at 38 is two years too young, and he says he doesn't want to stand. A spokesman for the Dominator said he might run in 20 years time.

The draw is being made later today for the most anticipated clash in this weekend's first round of tennis's Davis Cup: the Czech Republic versus holders Russia in Ostrava. The Czech team includes Jiri Novak and Radek Stepanek in the singles and doubles pair Martin Damm and Cyril Suk.

After a comeback last year Czech two-times world 800-metres champion Ludmila Formanova now has fresh health worries. The 29-year-old runner has both a problem with a nerve in her back and a kidney infection, and she may skip the indoor season in order to concentrate on the athletics world championships in Paris in the summer.