Czech tennis number one Jiri Novak has crowned the best season of his career by reaching the Masters Cup in Shanghai, and puts his new-found success down to coach Jan Kukal. Decathlete Roman Sebrle has been named Czech Athlete of the Year. And the first leg of the second round of the UEFA Cup did not go as well as the four Czech teams taking part might have hoped. All those stories and more are in Sports News. 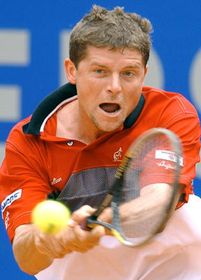 Jiri Novak, photo: CTK The Czech tennis number one Jiri Novak had a nervous week last week at the Paris Masters. Having been knocked out in the second round, Novak had to hope his rivals for the seventh (and last) place at the prestigious Masters Cup in Shanghai also failed to reach the final stages in Paris. Novak's prayers were answered, and the Zlin-born player can now look forward to the Masters Cup; the tournament - which begins next Sunday - features the season's top eight players.

"I'm overjoyed. It's the fulfilment of a dream I've had as long as I've been playing tennis. That's why players play, isn't it, to take part in such a tournament and take on the world's best players. So I'm very happy and it means a lot to me."

At 27, Jiri Novak has had the best season of his career, something he puts down to hooking up with coach Jan Kukal. Last year Kukal promised Novak in writing that the player would make the top twenty in the world, after years spent in the lower rankings. Kukal's promise came true and then some, with Novak recently making the world's top ten for the first time. Roman Sebrle named Czech Athlete of the Year, photo: CTK Decathlete Roman Sebrle has been named Czech Athlete of the Year. Sebrle has had one of the best seasons of his career; after winning the heptathlon at the European Indoor Championships in March, in August the 27-year-old took gold in the decathlon at the European Championships - the first Czech to win a European title in decades. Sebrle - sporting his army officer's uniform and a natty moustache - joked that the voters had had good taste.

Four-hundred-metre hurdler Jiri Muzik won silver at the European Championships, and also came second in the Athlete of the Year poll. Third was Vera Pospisilova, who competes in the discus. Dalibor Kupka, who trains both Sebrle and Muzik, was named coach of the year.

Zizkov's defeat by Real Betis, the other Czech teams in the second round of the UEFA Cup played their first legs on Thursday, and met with mixed fortunes. Sparta Prague beat Turkey's Denizlispor 1:0 at Letna stadium, while Slavia Prague lost 3:1 away to Partizan Belgrade and Liberec - also playing away - were beaten 1:0 by Ipswich.

Slavia beat their arch rivals - and Extraliga champions - Sparta 3:2 on Saturday, in an extremely exciting Prague derby. On Friday leaders Pardubice beat Vsetin 5:2, while at the other end of the table the Havirov Panthers lost yet again, this time to Ceske Budejovice, 7:2 the final score. Havirov's record is almost comically bad, with just three points in 18.