It was a dramatic weekend for Czech tennis number one Jiri Novak, who reached his first ever Masters Series final only to miss the match through injury. In football, Sparta Prague remain at the top of the league, while foreign clubs are reportedly hoping to sign several of the club's key players. Pardubice stay on top of ice hockey's Extraliga, while Roman Sebrle has again been nominated for world athlete of the year. All those stories are in Sports News. 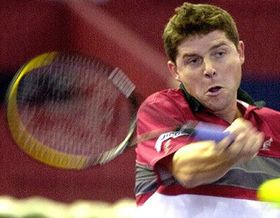 Jiri Novak, photo: CTK It was a dramatic weekend for the Czech tennis number one Jiri Novak, who beat Fabrice Santoro of France in straight sets in the semi-final of the Madrid Masters on Saturday. At the end of that game Novak fell to the ground with his arms clasped in joy, having set up a clash with Andre Agassi in the Czech's first ever Masters Series final. But, sadly for Novak, it wasn't to be. He did appear before the Madrid crowd on Sunday, but only to announce - with apologies - that he was not fit to play, having sustained an injury in the semi-final.

"It happened during yesterday's game with Santoro, which I won, luckily. Towards the end of the game I went for a difficult ball and I felt a sharp pain in my left thigh....as for the future, I don't know yet. I've pulled out of a tournament in St Petersburg, and then I've got the final tournament in Paris, but of course I don't know if I'll be alright."

Next week's Paris tournament is the last of the Masters Series, and the last chance to pick up points for the Masters Cup in Shanghai. Novak is fifth in the Champions Race, and needs to stay in the top seven to qualify for the tournament, which is the climax of the ATP circuit.

Sparta still in front after home win over Zizkov 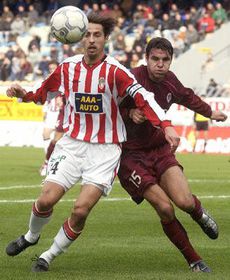 Michal Pospisil (Sparta) contra Ales Pikl (Viktoria Zizkov), photo: CTK Sparta continue to lead the football league, after a 2:0 home win over Prague rivals Viktoria Zizkov, with goals from both Jiri Jarosik and Michal Pospisil in the last ten minutes of the first half. Second are Liberec, who ended a poor run by beating Blsany at home. Bottom of the table Hradec Kralove played a scoreless draw at Brno, while second-from-bottom Ceske Budejovice had some reason to be cheerful on Sunday, when they beat Jablonec 4:1 at home.

There have been several reports in the sports pages about foreign clubs putting Czech league players at the top of their shopping lists. Sparta Prague have had the most interest from foreign scouts; Rome's Lazio are said to be interested in Jarosik, while English Premier League clubs have their eye on defenders Tomas Huebschman and Zdenek Grygera, the latter said to be wanted by Leeds. Sparta chairman Vlastimil Kostala, however, says the club will only allow one first-team player to leave at present. Pardubice - Ceske Budejovice, photo: CTK Pardubice continue to lead ice hockey's Extraliga, despite a 7:3 defeat at the hands of Ceske Budejovice on Sunday. Trinec are four points behind, after a 6:0 drubbing of bottom-of-the-table Havirov, who have a measly three points from 14 games. Champions Sparta Prague meanwhile climbed one place to seventh, after a 3:2 win over Zlin.

Sebrle again nominated for world athlete of the year

Czech decathlete Roman Sebrle is - for the second year in a row - among the ten names on the short list for the IAAF world athlete of the year. In August, Sebrle became the first Czech in decades to win gold at the European Outdoor Athletics Championships in Munich.