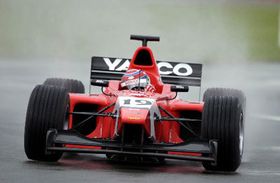 Football - and Czech teams secured big wins in the first leg of the Intertoto Cup last weekend. Teplice thrashed Portugal's Santa Clara 5-1, while Synot earned a 4-0 success over Sweden's Helsingborg. The second leg matches are due to take place next weekend.

Tennis now - and there is one Czech among the Wimbledon Champions. Barbora Strycova together with Elke Clijsters of Belgium won the girls' doubles, after defeating a German-American couple of Anna-Lena Groenefeld and Ally Baker 6-4 5-7 8-6.

Meanwhile, defending champion Jiri Novak has withdrawn from this week's Swiss Open tennis tournament because of illness. Novak was unseeded when he defeated Spain's Juan Carlos Ferrero in last year's final but he has not travelled to Gstaad this year because of a high fever. The withdrawal of Novak, who would have been the second seed this year, enables Spaniard Alex Corretja to come in and take the eighth and final seed when the tournament begins on Monday.

The Czech triathlon team for the first time ever have brought home a gold from the European Triathlon Championship which took place in the Hungarian town of Gyor. The Czechs were one tenth of a second faster than silver-winning Spanish team in a race consisting of 450 metres swimming, 20 kilometres cycling and five-kilometre run.

And finally, back to football and the First Football World Atlas, an original Czech book, has been translated into English. The atlas contains maps, historic materials, and information about more than 10,000 clubs from all around the world and all international competitions. The English version is distributed in Britain by Sportspages.