It is exactly 90 years since the very first regular radio broadcasts in Czechoslovakia began on 18 May 1923. These were humble beginnings, starting in a borrowed scouts’ tent on the edge of Prague. But within just a few years, radio became central to the lives of millions of Czechoslovaks and over the decades the archives here in the Czech Radio headquarters have become an Aladdin’s Cave of sound, a living audio source for anyone wanting to research into twentieth century Czechoslovak history. For our 90th birthday, we joined forces with a group of journalism students in Prague to bring some of these voices from the past back to life.

The recordings that we shall be hearing in this programme include Czechoslovakia’s most celebrated pre-war feminist Františka Plamínková, appealing for reason on the eve of World War Two, we’ll be hearing from “Old Gravel Voice” General Harmon as he gets ready to leave Plzeň in 1945, and the legendary Czechoslovak Radio correspondent, Karel Kyncl, as he talks to the first African American to study at the University of Mississippi in 1963. There is also a moving encounter with a six-year-old girl, back home after being taken from her mother at just four months; we shall hear how American students saw Prague back in 1937, and a friend of Charlotte Masaryk, the American wife of Czechoslovakia’s first president, recalls their friendship.

As regular listeners will know, Czech Radio has a huge sound archive, going way back to the end of the 1920s and this is where all these recordings were found. The archive was the focus of project I undertook this term with a group of students at the Anglo-American University in Prague in a course that I teach on the history of the electronic media. With the enthusiastic cooperation of Czech Radio archive staff, the students began by looking through the now fully digital catalogue, and ordered up from the archive a few of the hundreds of recordings that are in English. Most had not been listened to for well over fifty years. The students listened to the recordings and found out more about them – who is talking, when and in what context. 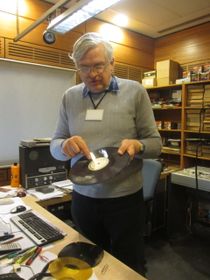 Czech Radio sound engineer Miloslav Turek, photo: Kateryna Dedukh The following programme is the result of the students’ and my own research. We hear extracts from these recordings, combined with some of the students’ insights and observations.