Ours is one of Europe’s most beautiful ministries, says Daniel Herman at Ministry of Culture’s Nostitz Palace

It’s not every day a government minister agrees to give a tour of his ministry. Then again, very few have such impressive headquarters as the Czech minister of culture, Daniel Herman. His department is housed in the magnificent Nostitz Palace in Prague’s Malá Strana district. And, as he explains in his stately first-floor office, he even has an ancient family connection to the building. But first Minister Herman tells us a little about the history of the palace. 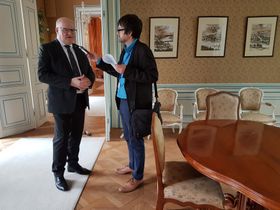 Daniel Herman, Ian Willoughby, photo: Ondřej Tomšů “It’s a Baroque building from the second half of the 17th century. The highest chancellor of the Kingdom of Bohemia, Count Johann Hartwig of Nostitz, founded this building and it was built according to the plans of the Italian architect Francesco Caratti.

“It used to be the main quarters of the aristocratic family in the capital of the Kingdom of the Bohemia.”

I’m sure you’ve visited many ministries in Prague and in other cities around Europe. How does this ministry compare to others you have been to?

“I think this ministry is the most beautiful among all those in the Czech Republic and I think it’s among maybe the first three in Europe.”

The ministry underwent major renovations some years ago. Were you ever here before then? Could you compare before and after?

“No. I am only informed only from documentaries and photographs.

“Because of that it was very well preserved. That helped very much to keep the building in good condition.” 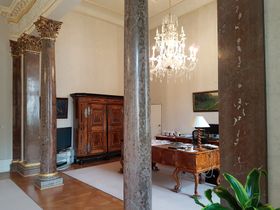 Daniel Herman's office, photo: Ondřej Tomšů Do you know what your office was used for in the past?

“My office used to be a bedroom. The count’s family’s bedroom. Behind these two marble columns there was a bed. The head was oriented towards the wall.

“Between the columns was a curtain and behind that was the intimate part of the room.

“This second part of the room was more public.

“This staircase was added a little bit later, in the 1820s. Because at the time there was a kids’ room on the second floor and it’s a practical way to reach more easily this piano nobile, this first floor, from the second one. Because of that the staircase is here.”

I’ve been told that an ancestor of yours, a certain Josef Dobrovský, had a connection with this building. Could you tell us about that please?

“Yes. It’s a very interesting story. Josef Dobrovský was a great-great-uncle of my grandmother. He came in 1776 as a 23-year-old young man to this building in order to take care of the library.

“The Nostitz Library is a large library which contains around 14,000 volumes, very interesting books from the 13th to the 20th century.

“I think this ministry is the most beautiful among all those in the Czech Republic and I think it’s among maybe the first three in Europe.”

“He took care of this library, which for me is something very personal and interesting.

“He was a Catholic priest and after his work here at the Nostitz Palais he became the rector of the archdioceses seminary in Olomouc in Moravia.

“He was also a great scientist in the Czech or old Bohemian language.”

Isn’t there some connection between Josef Dobrovský and the Werich Villa which is near here [on Kampa]?

“Right. There is a very concrete connection. Josef Dobrovský and Jan Werich lived in the same house, the so-called Werich Villa.

“It’s located in the former Nostitz garden, very close to the Nostitz Palais, and at the time it used to be like an apartment for some important people who helped the Nostitz family – for example by keeping the library.”

Just down the parquet-floored corridor from the minister’s office at the Nostitz Palace is another grand space. The Blue Room is used for meetings and to welcome guests to the Ministry of Culture. And, Mr. Herman says, visitors are always seated facing the square Maltézské náměstí. 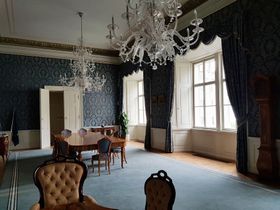 Blue Room, photo: Ondřej Tomšů “The view from the windows of this Blue Room is really nice. We can see the St. Vitus Cathedral and St. Nicholas Church and these nice Baroque houses, where for example the Japanese Embassy and the Danish Embassy are.”

I presume this building makes a big impression when you have visitors, especially foreign ones?

“Yes. We have a lot of foreign visitors, above all ambassadors but also ministers of culture from other countries. Or other people from all over the world.

“One of the most interesting visitors here in recent months was His Holiness the Dalai Lama of Tibet.”

Of course that was a big story when you invited the Dalai Lama here. It was a private visit, but it still caused a great reaction in Czech politics.

“It was not a private visit. It was an official visit, because the Ministry of Culture in the Czech Republic is also responsible for churches and religious communities.

“And his Holiness the Dalai Lama is the head of the great religious community of Tibetan Buddhists.

“From 1927 till 1997 the embassy of the Netherlands used to be here. That helped very much to keep the building in good condition.”

“For me it was normal that I welcomed him here. Because it’s an appropriate place.”

But the Czech government’s position in recent years has been more pro-China; they’re in favour of improving relations with China. You must have known that it would cause a negative reaction with some people?

“Yes. Some of my colleagues agreed with this visit. Some of them not so much.

“But I think we live in a democratic society. We have a great space of freedom and it’s our duty to fill this space.

“In my view it’s very important to also fill this space with the values of human rights and democracy.

“For me his Holiness the Dalai Lama is one representative of that orientation.” 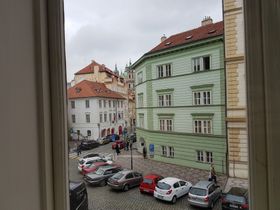 View from Blue Room, photo: Ondřej Tomšů Aside from politics, what impression did the Dalia Lama make on you at the personal level?

“The Dalai Lama is above all a normal human being. We spoke to each other about the situation in the world and about cooperation between the great religious systems.

“For me he’s something like a pontiff. You know, a man who is creating bridges between peoples, between nations, between religions.

“And I think that that’s very important for today’s world, which is really no easy world.”

There’s also a spiritual dimension to the next stop on our brief tour of the Nostitz Palace, a small, darkly lit and quite beautiful chapel that serves as a prayer room. Mr. Herman is himself a former priest and may be known to very long-term Radio Prague listeners as a one-time spokesperson for the Czech Bishops’ Conference.

“The Dalai Lama’s visit was not a private visit. It was an official visit, because the Ministry of Culture is also responsible for churches and religious communities.”

Is this room used as a chapel today?

“There are no services. But I believe in God and for me it’s also a gift that this room is here, that this space is here.

You’re known as a spiritual person and you’re not a career politician. How have you found adjusting to the world of Czech politics, which is often rather dirty?

“I have relatively a lot of experience with different parts of society. I used to work for the church. For the police. Here at the Ministry of Culture [under minister Václav Jehlička in the late 2000s]. For the presidential candidate Jan Švejnar.

“I was also elected director of the Institute for the Study of Totalitarian Regimes. 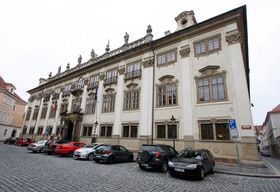 “I think it’s important to create bridges between people of good will. And it’s possible even in the world of politics.”

Have you often struggled to get the importance of culture, and of funding culture, across to your cabinet colleagues?

“I think our government understands in common relatively well that culture is an important element of the life of the society.

“With the help of the government I increased our income in these recent three years by around 43 percent. Which is very good.

“So no, it’s not necessary to struggle. It’s important to argue, but I don’t think there is someone [in the cabinet] who is a priori against.”

Our visit to Daniel Herman’s Ministry of Culture concludes in the Billiard Hall on the first floor of the Nostitz Palace. It’s the largest room in the entire 17th century building.

What goes on here today?

“This is the most precious hall, where state presidents, princes or chief of parliaments are welcomed, and such high level occasions. For example, the Dalai Lama was here.” “No, but there used to be, decades ago.”

Do you ever have parties here for your friends? It looks like a fantastic place to have a party.

“No, I haven’t ever organised something like that here. But many times I have welcomed some friends here and showed them the rooms, the palace. For a visit – but not for a party.”

Well, you still have time.

“[Laughs] Sure. It’s a good vision, but I don’t think we’ll have something like that here. I don’t plan it.”

Generally speaking, how have you enjoyed the experience of being minister of culture, since the beginning of 2014?

“It’s a very challenging period of my life. And it’s a good opportunity to get closer to, for example, the people who take care of historical monuments. I have met a lot of them and I admire their work.

“Or to get closer to artists in theatres. We have in the Czech Republic over 500 theatres. Or galleries, museums. It’s really a great opportunity to meet interesting people.

“And I think we have a good army of employees. It’s around 6,500 people, because we have 29 state-supported organisations which are under the responsibility of the Ministry of Culture. And we have really a lot of very interesting and good people.” 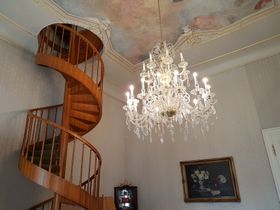 Staircase in the minister's office, photo: Ondřej Tomšů What do you think you will miss in the future about being culture minister?

“It’s hard to say. Because every day brings something new with the new morning. We will see.”

Also now you travel a lot and it seems to me you go to every major cultural event in Prague. Where do you find the energy?

“I think every human being has his or her personal springs of energy. I don’t think I am a typical workaholic. No.

“But the word minister comes from the Latin word ‘ministrare’ – ‘to serve’. And I feel a servant. A servant of society of the state.

“I think that gives me the energy back.

“And for me what’s important, as I already told you in the chapel, is mediation or a link to God. Maybe all of this helps me to live [laughs].”