Alphonse Mucha’s grandson John Mucha is the head of the Mucha Foundation, which manages the legacy of the great Czech Art Nouveau artist. He launched the successful Mucha Museum in the centre of Prague during the 1990s, and has recently being holding talks with the city’s authorities on the long-delayed creation of a dedicated home for Mucha’s extensive work the Slav Epic.

When we spoke at his Prague home, I asked John Mucha how it felt to be the descendant of a figure of such huge cultural importance.

“When my father died in ’91 – I was a banker, when he needed help I helped him, but basically he ran things on his own – I thought, right, what happens now?

“It’s a huge responsibility. What I hope is that when I’m dead and gone people won’t say, oh goodness me, John, he really messed things up.”

One thing you did in the 1990s was that you were involved in the opening in Prague of a Mucha museum. How did that come about?

“It was complete luck. Historically, my father had been trying to get someone to show Mucha’s work in Prague, because you couldn’t see it anywhere. The only place would be the [St Vitus] cathedral with the window, Obecní Dům [Municipal House], that basically was it, or go to Ivančice [the artist’s birthplace] or Moravský Krumlov [where the Slav Epic is housed].

“I happened to meet at a lunch Sebastian Pawlowski, who had just arrived from Switzerland. At the lunch he was telling me how he had just won his first contract from the City of Prague to renovate the Kaunický Palace. He could have office space, he could have flats. But, because it’s a historical building, it’s got a wonderful representational area, part of it had to be used for the arts. And he was lost.

“So I said Sebastian, look no further. Literally the second day there was a press conference, people laughed when he said the museum would be open within one year. 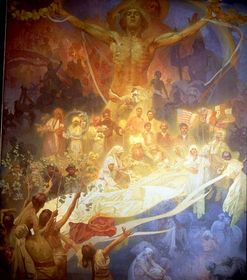 The Slav Epic “I hope Sebastian, if he hears this, will forgive me: like a Swiss cuckoo clock, within one year the museum was opened. And it is one of the most successful museums in the Czech Republic.”

I was reading that the copyright has expired on Mucha’s works. What does that mean in practical terms? Does it mean that anybody can, I don’t know, create a mouse pad with his images on it?

“It means that the rights are in the public domain, with two exceptions. Exception one are works that have not yet been photographed or seen. And there are quite a few of those. There, once we photograph them or we make the images available, those images have their own copyright.

“The other exception is, we have the biggest and possibly best quality archive of all the images. Because these images were created within the last five years with the latest technology, they all have their own copyright of 75 years.

“But we always look to work with people, because we always want to make sure that the quality of what is being done is good.”

In the 1920s your grandfather gave his great work the Slav Epic to Prague, on the condition that Prague build or create a dedicated space for it. That still hasn’t happened and it’s an ongoing controversy. What is the latest state of play with the Slav Epic?

“The situation was that until relatively recent times the City of Prague didn’t talk to us at all. And then when [councilor] Milan Richter was appointed as the person responsible for culture, he actually began a dialogue with us. You know, in dialogue there are situations in which you don’t have to agree, but you talk and that’s important. 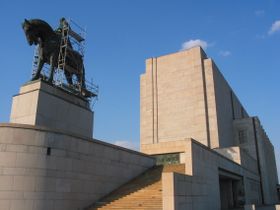 Vítkov “At the beginning of December we had a meeting and we decided jointly that there were probably four places to be considered: Vítkov, the idea of which has been kicking around for quite some time now, about three years at least; then the City came up with the idea of somewhere around Old Town Square.

“Then we came up with two possible places: one is the where Těšnov railway station was, and Letná, where the monument to Stalin was.

“We then had another meeting at the end of January, by which time it was reduced to Letná and Vítkov. The City of Prague were saying, it really is Vítkov, and I said, well, not quite. But it gave us an opportunity to present a full detailed study of Letná.

“The latest is that I had a meeting with the City yesterday. In a way I think we’ve slightly taken the initiative now, because based on the study we did for Letná, the City has now commissioned a study of similar depth for Vítkov, so that they can compare each against the other on equal ground.

“I have a number of exceptions against Vítkov. I have recommendations for Letná. That’s my position. We’ll see how it goes.”

How do you think things will look in 10 or 20 years, realistically speaking?

“There will be a wonderful museum, a wonderful building on Letná, which will be fantastic and people will be coming from all over the world to look at both the building and the contents. 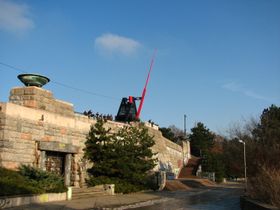 Letná “This is actually important. The City with Vítkov seems to be just focusing on exhibiting the 20 canvases of the Slav Epic, and that’s it. It’s crazy. Prague has the wonderful opportunity to do something like the Van Gogh Museum in Amsterdam.

“I would put in the Bosnian Pavilion, that was the spark. I would put in the Slav Epic, exactly as Alphonse wanted it. From our resources, we would donate substantive material: studies, pastels, photographs, so it becomes three dimensional, it’s not just bang bang bang, 20 canvasses. And you could do other things surrounded with that.

“And perhaps most important, I have an investor who is prepared to put in 600 million crowns. The additional thing people say to me is, my goodness, you had Stalin there [on Letná]. Well, you had the dead body of Gottwald in Vítkov.”

What for you is the significance of the Slav Epic?

“There is no doubt that when Alphonse began, the aspect of patriotism was very important. He’s in Paris, he’s famous, whatever, and there is his nation, živoří, in Czech [is struggling/withering away].

“Then as he progressed, I think actually the Slav Epic – and I’m not an art historian – the Slav Epic became something much, much bigger for him.

“It is about humanity, it is about fundamental values, which apply globally around the world, whether it is love, hate, or peace, war, anything that governs our lives. 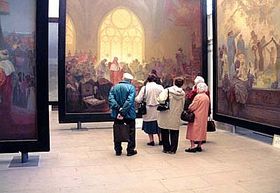 The Slav Epic in Moravský Krumlov “People say to me, my goodness, John, come on, where’s your evidence? I have evidence, because after he completed the Slav Epic he began working on a triptych.

“The triptych – which was never completed because the Gestapo came and we know the rest – is called The Age of Reason, The Age of Wisdom, and the Age of Love. Something which applies very much today.” The city of Prague has stepped up the search for a suitable space to house the famous Slav Epic, a cycle of 20 large paintings by Alfons…