Gary Keith Griffin is currently in Prague presenting his new Czech-language movie Listopad (November), which explores the Velvet Revolution from the perspective of young participants in the street demonstrations of that time. Griffin also had personal experience to draw on, having himself been in the city as those historic events were unfolding at the end of 1989. When we met on Národní St., where the revolution began on November 17 that year, I asked the Oscar-winning cameraman what he had found when he arrived in Prague on an NBC news assignment. 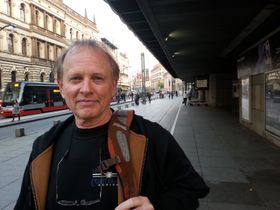 Gary Keith Griffin, photo: Ian Willoughby “Euphoria. It was amazing. You really can’t describe the atmosphere of that period of time, between November 17 and the end of December when Havel was installed as president.

“You really can’t describe the feeling. It was unbelievable. People opened up. They were telling everybody their stories. They hadn’t been able to speak for 20 years, and suddenly everybody was talking.”

Did you get to meet people like Havel or other leaders of the Civic Forum?

“Not on that trip. As is my wont, I spent my time in the streets with the people, filming what was happening in the streets. I’m a documentary cameraman. That’s what I do.

“So I go where things are. I ended up in the middle of these big demonstrations going on. That’s where I wanted to be.”

I presume when you were out and about on the streets here 25 years ago few people spoke English?

“That’s true. Nobody spoke English… I remember I had a translator and a crew with me one time and we went to a pub somewhere and had dinner.

“I think I gave the waiter five American dollars as a tip and it was like the most money he’d ever seen.”

He’s probably still got it in his wallet.

“He probably still has it in his wallet. Let’s hope, yeah.”

Do you have any other standout memories of that period? 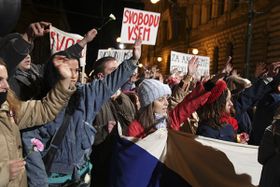 'Listopad', photo: official website of the movie “Just the euphoria. When you’re in the middle of it, it’s electric. It’s like any incredible revolution when people take to the streets and things happen.

“You just can’t describe it. It felt to me like… freedom. I can’t think of any other way to describe it – it just felt like freedom.”

People say that period didn’t last very long and that even by the beginning of the next year that was over, the period of people talking to strangers or even embracing strangers.

“It’s true. By January everybody really went back to work. They were like, got to go to Germany and make some marks, got to get going.

“It was a pretty bleak spring, the next spring. Because so much had changed and so much had to change, and nobody really knew how to do it yet. So it was a very different mentality at that point in time.”

The revolution happened quite quickly. It began in the middle of November and Havel was elected by the end of December. Do you feel there was any one moment when everybody realised it was a done deal, that they had achieved a revolution?

“I think nobody really truly believed it until Havel was president. There was still a sense of unbelief, of, what have we done? How did we do this? And they didn’t know.

“In retrospect many people will say, it was a plan by this, a plan by that, but none of the people on the streets knew any of that. They just knew that something incredible had happened. They kept moving and kept coming out and coming out. 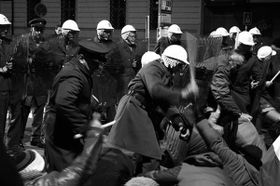 'Listopad', photo: official website of the movie “And I think it really didn’t cement itself in their minds until Havel was president. Once he was president, they went, OK, we’re in, and then everybody collapsed for Christmas and New Year’s [laughs].”

I guess there were many foreign crews here at that time. But still you must have been quite exotic as a young American in Prague in those days?

“Yeah, kind of. There were a lot of German and Austrian crews here. I ran into a lot of people from ZDF and ARD and other European networks. But I don’t recall running into another American at that point. There was nobody [laughs].”

I assume people would have associated your country with freedom.

“Well, we have a history of it. You know, Americans love a good revolution. But they still don’t know anything about the Velvet Revolution.

“I said in one other interview, if they know anything about the Velvet Revolution, they have this idea that it was led by Frank Zappa and Lou Reed, arm in arm with Václav Havel, marching up Národní třída and sweeping away the Communists. That’s what they think of.”

Is that one reason you’ve made Listopad?

“There were two reasons. One was, it’s really an homage to my friends who were in the streets. It’s taken from true stories of people who were here on November 17, 1989 and did what they did, which was just astonishing. 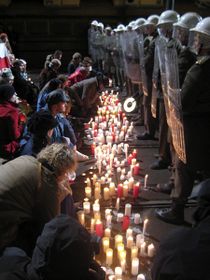 'Listopad', photo: official website of the movie “Also I wanted to give people in America a feeling of what it was like to be here in those times, to be in the streets, to be 17 years old and confronting the police.

“And then to have something incredible happen – to actually win. It’s unlike any other story, except maybe the Arab Spring. Close on.”

Did you use original footage from those days and try and recreate it in the film? Or did you take a freer approach?

“We used actual footage that I shot in 1989 for some of it. But most of it was recreated.

“We had 500 extras out here on the 20th anniversary of the Velvet Revolution. And we reenacted in one night the calamitous events of November 17, 1989. So it’s very fitting that the film is now out on the 25th anniversary.”

What role did [late writer] Arnošt Lustig play in the writing or the creation of the film?

“Arnošt was my partner, along with his son Pepi and Charlie Castle. And Arnošt is the screenwriter.

“I wrote the book, which is a collection of short stories based on the information that I had gathered from all my friends and various places. And Arnošt did the design of the whole film.

“Unfortunately, Arnošt was also getting towards the end of his life, so we had to kind of fill in a lot of the gaps with the dialogue and things, but he was the designer of the film. 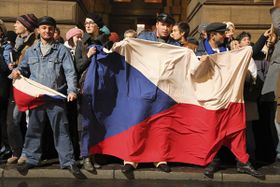 'Listopad', photo: official website of the movie “He was the designer of the conflict and how it was set up and organised. And some of the best lines in the film are of course Arnošt, because he’s Arnošt.”

You mentioned people believing that Havel led the revolution with Frank Zappa and Lou Reed. What other misconceptions do you think people have about the revolution?

“I think Czechs themselves have a feeling that it was an exchange of power. I think sometimes they forget what really happened in the streets.

“Whether you believe the rumours of the plot or not, the fact is that the people in the streets turned it in a different direction.”

When you say plot you mean the idea that there was some kind of pre-agreement to hand over power peacefully?

“Yes. There’s all sorts of rumours about what actually happened. Nobody really knows. “That generation has now moved into, if you will, the intelligentsia of the Czech Republic. Without the people in the streets that wouldn’t have happened.

“I think it’s really important to remember that the people in the streets made the change. They made the Velvet Revolution.”