At a grand ceremony at the Ministry of Foreign Affairs in Prague on Friday, 14 individuals and one group received the annual Gratias Agit award, which goes to those who have promoted the good name of the Czech Republic internationally. Recipients included several figures from the world of culture, including acclaimed Polish filmmaker Agnieszka Holland, the speaker of the Seychelles’ Parliament and representatives of Czech expatriate organisations. 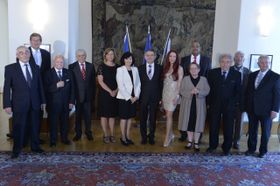 Photo: CTK The prizes were handed out at the Černín Palace by the Czech foreign minister, Lubomír Zaorálek.

“That’s why they are something like a very good promotion of the Czech Republic in the world. And when we take this very complicated history of our country in the 20th century it’s fascinating how these people are so many times and years devoting time to raising the name of the Czech Republic.

“They are fascinating figures and I’m glad that I have this opportunity to give them this award as something like a sign or a signal that we know about it and we appreciate it.”

Among the recipients was Prague-born Eliška Krausová, who was visiting Colombia when the Soviets invaded Czechoslovakia in 1968 and decided to stay. Many decades later, after the closure of the Czech Embassy in Bogota, the professor of French and Spanish set up ASOCHECA, a Czech expatriate association. The sister of Jan Kraus, a popular actor and talk show host, and Ivan Kraus, a writer and actor, Eliška Krausová explained what the Gratias Agit meant to her – and praised its organisation. 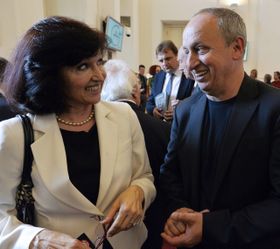 Eliška Krausová, Jan Kraus, photo: CTK “It’s a great honour. I’ve been used to speaking badly of the Czech Republic for many years – now I’ll have to start speaking well of it! My husband received the Prince of Astrurias award, a huge prize for Spanish speaking people. There’s a big ceremony, but it’s just one day. We’ve had a three-day programme and we’ve got to know one another. We’ve seen places like closed parts of Prague Castle and Jan Masaryk’s flat – which I found moving [at the Foreign Ministry]. I think it’s terribly well done.”

Several of the recipients were not Czech-born but had spent time here and enhanced the country’s reputation through their civic activities or work. In this category was the Oscar-nominated Polish movie director Agnieszka Holland, who studied at Prague’s FAMU film school in the late 1960s. In 2012 she made Burning Bush, a well-received mini-series looking at the aftermath of the self-immolation of Czech student Jan Palach in 1969. In a short speech, Agnieszka Holland told the assembled she had been indebted to the Czech Republic. But in what sense was she indebted?

“I think that a lot of my experience, my deep experience and my… richness which helps me in my life decisions came from my Czech experience and Czech culture. I feel that a big part of myself is from here.” Agnieszka Holland, photo: CTK Do you think that your filmmaking was informed either by your time at FAMU or simply living here?

“I think both. I think the mix of Polish romanticism and inclination to pathos and Czech irony, civility and realism and people’s love of the simple life… this created in my some kind of special mix, a special richness, and I think even in my American films you can feel this influence.”

You got a very big cheer earlier and I know Burning Bush has been extremely popular with Czech viewers; has it been gratifying to you to see how popular it is, how much people respect and value it?

“It’s one of the biggest gifts I’ve received as a filmmaker. I never thought that it would make such a deep impact. I hoped that it would be important to some extent, but I didn’t expect that it would touch people’s souls so deeply.”

What does it mean to you receiving this award here today at the Ministry of Foreign Affairs?

“It’s a little surreal, as this kind of situation always is. But I am grateful and honoured – it’s simple.” 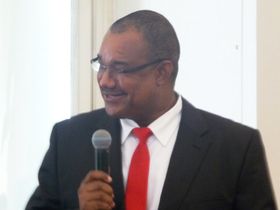 Patrick Matthew Antonio Herminie, photo: Milena Štráfeldová Today Patrick Matthew Antonio Herminie is the speaker of the Seychelles Parliament. But three decades ago he was a medical student in Prague, and since then he has done much to foster relations between the two states. Indeed, the official booklet for the 2014 Gratias Agit awards describes him as “an unofficial ambassador of the Czech Republic in the Seychelles”. He looks back on his time in Prague fondly.

“[Laughs] Well, those were the days. I came in 1983 and I did one year of language in Mariánské Lázně, which was the school for learning the Czech language then.

“Then I came to Prague to study medicine at Charles University. It was a very nice period in that I came at the very young age of 18, so most of my youth I spent here in Prague.

“Medicine was very tough because we had to learn it in Czech, and you can imagine doing a tough subject like medicine in a difficult language like Czech. It was not easy but somehow I managed.

What was your initial impression of Prague? It must have been quite a culture shock coming here?

“Oh yes, completely different from the Seychelles. In fact even the food – things like yoghurt, ham, it was the first time I’d seen them in my life was here in Prague. Knedlíky!

“It was a bit different but we adapted very well and very fast, because it was OK.” 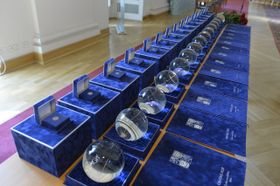 Photo: CTK Did many students come here from the Seychelles?

“Yes. But most of them went to Bratislava and Brno. A few of us, around three or four, came to Prague.”

How is your Czech today?

“[Switches for a few moments to decent if accented Czech] I don’t know. I can’t practice at home – that’s the problem. Otherwise, I read Czech newspapers but that’s not enough – you need to speak with somebody. I should have married a Czech wife!... I don’t have anybody to talk to. I understand excellently but sometimes I have some problems with some words.”

Finally, what does it mean to you receiving this award here today?

“Also my first daughter is now in Prague, studying medicine as well…”

So it’s a family tradition?

“Yes, a family tradition to come to Prague. I hope that my grandchildren will also come to Prague to study. Because I know that the standard is very high and the discipline is good; these virtues, these values, have helped me to progress in life.” Edward J. Dellin, photo: CTK Other recipients of the 2014 Gratias Agit awards were: Karel Aster, who signed up to the US Army after the Japanese attacks on the Philippines where he was helping set up a branch of the Baťa shoe company; French conductor Serge Baudo; Edward J. Dellin, chairman of the Prague Committee of Chicago Sister Cities; Almis Grybauskas, a Czech studies scholar from Lithuania; Josef Chromý, who set up a successful wine business in Australia; translator Reiner Kunze; fashion designer Blanka Matragi; Odilon Borges Jr., honorary consul of the Czech Republic in Brazil; Professor Otto Pick, former director of Radio Free Europe; Andre Poirot, who initiated twinning between his town in France and Slavkov; Ján Valach, a Slovak born musician resident in Belgium; and the Masaryk Memorial Institute in the Canadian city of Toronto. 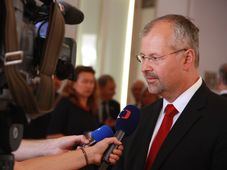 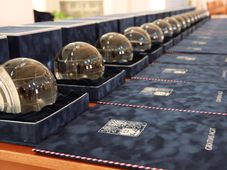