Few if any Westerners have been living in this part of the world for as long as Don Sparling. Indeed, the Canadian-born academic came to Czechoslovakia in March 1969, just seven months after the Soviet invasion that crushed the Prague Spring movement. He has been here ever since, for the most part living in Brno, where he eventually became head of the English Department at Masaryk University. 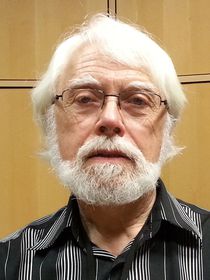 Don Sparling, photo: Ian Willoughby When Professor Sparling stopped by at our studios on a visit to Prague, I asked him what had first brought him to this country.

“I was studying in England and one of my best friends had come here to Czechoslovakia in ’67 to teach English. This is Paul Wilson, who many Czechs have heard of because he translated Havel and Škvorecký and all the rest.

“He was teaching in Brno and in Prague in ’67–68 and in July, beginning of August ’68 I came here just to visit him. And it was a really fascinating time, needless to say.”

Where you here when the tanks rolled in?

“No. I wasn’t. We had left the country. We were in Hungary and on I think August 20, ’68 we had to decide whether we were going to go for a few days on the beach in Yugoslavia or come back here to Czechoslovakia.

“We chose Yugoslavia, which turned out to be safer, of course, but not nearly as interesting as if we had come back.

“Then I went back to England. It was somewhat complicated. I was supposed to have a job, but I didn’t. And I decided to come back here because I wanted to spend another year in Europe. Another year [laughs].

“It was a very interesting time to come, because it still was not really clear how things were going to work out.”

But most people were going in the other direction?

“They were, yes, but they were Czechs and they had a good reason to get out. But for someone who was curious about politics and international relations and affairs it was a very, very interesting time, because the passive resistance had been so strong that they had not yet been really able to turn the screws, at least not completely, or they were even just starting to turn the screws.

“I was curious how it would turn out. I wrote to a couple of language schools and the one in Brno said, come. August 1968 in Prague “So I came in March of ’69. I mean, Dubček was still first secretary then. It took a long time; it took the whole year for them to really close down the country.”

For you, what were the main attractions of Czechoslovakia in those days?

“I found it a very beautiful country. When we’d been here in July–August of ’68 we’d travelled a lot outside Prague as well: Brno, the countryside, Moravia, down to southern Bohemia and so on.

“Prague is supremely beautiful. I love architecture, so I was a complete sap for everything I saw around me.

“And it was the people. This friend of mine, Paul Wilson, had met through his future wife and a lot of other people incredibly interesting people.

“That whole time I was being exposed to interesting people doing interesting and crazy things. So it was the people and the country.”

Could you elaborate on the interesting people and the crazy things?

“There was a whole group of people who I eventually spent a lot of my time with when I was here in Prague – because I started out in Brno but was then in Prague from ’70 to ’77.

“A lot of people around the Crusaders School: Honza [Jan] Steklík and Karel Nepraš and all of these people, who then were on the fringe of the cultural world because they couldn’t exhibit any more, they were personae non grata and so on.

“They had very strange jobs. Otakar Slavík was a scene-shifter in the National Theatre and he’s now one of the great icons of Czech painting in the post-‘60s.

“We spent a lot of time in pubs drinking and doing crazy things. They had a very strange sense of humour.

“This… organisation that Steklík and Nepraš created, this virtual organisation, was named after the pub where they used to hang out [U Křížovníků]. It’s official title was the Crusaders School of Pure Humour Without Jokes, or Without Wit. 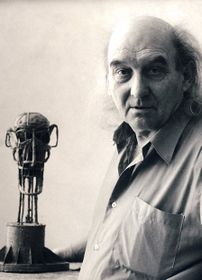 Karel Nepraš, photo: NoJin, CC BY-SA 3.0 “That kind of slightly bitter or slightly ironic humour pervaded the whole group. They used to do wonderful events. They would go off to the countryside and spend the weekend improvising things.

“Steklík for instance was the first person here doing land art. He had a wonderful event called Airport for Clouds, where on a beautiful big meadow we created these cloud shapes out of huge rolls of paper.

“It was just a fascinating group of very, very inventive and very funny and charming people.

“The other people I spent time with in Prague were people at the Slovácký krúžek, the oldest folklore group in the Czech Republic.

“I got interested in Moravian folklore and I ended up actually running the group of young people. I ended up teaching them their own songs and dances, basically.

“They were also wonderful people and Moravian folklore is just phenomenally beautiful.

“So I had these two very strange groups – or wonderful groups of people, but the combination was strange; nobody from either group knew anybody from the other side of the fence, as it were.”

Were there any restrictions placed on you by the authorities? Did they keep an eye on you, anything like that?

“Yes. I was never personally aware that they were watching me, following me, or whatever. But I assumed they were.

“Of course, after 1989 when I could see my police file it showed that I had been absolutely right in my assumption.

“But I never tried to let my actions by guided by this thought. I wasn’t going to run around and say, this is a rotten, stinking regime. Why don’t you storm the Communist Party headquarters?

“I thought it was better to make criticisms or to make critical remarks that were of a ‘moderate’ nature. It seemed to me that the best thing to do was to behave as naturally as possible. Photo: Dmitry Poliansky, stock.XCHNG “And it seemed to work. Rather curiously and ironically, it was only towards the end of the ‘80s that the secret police actually did contact me. That was then a whole series of meetings and so on.”

Were they trying to recruit you?

“Yes, they were. That’s the way the series of meetings moved, towards a moment when they wanted me to sign a little piece of paper saying that I would report to them and so on. And I simply said, no.”

What did your friends and family at home think of you moving to a Communist, essentially police state in the ‘70s?

“My family never said a word about it at all. I mean, from the time I was young, I and my brother and so on, they simply assumed that beyond a certain age we were on our own and it was our thing.

“They came to visit very often and loved it here. They didn’t think very much about the implications of it being a police state. Canadians I don’t think thought so much in terms of the Cold War and the enemy and this sort of thing.”

I don’t want to sound like Joe McCarthy, but were you a socialist?

You spent several years in Prague and then moved to Brno, where you still live. Could you compare life in the two cities in those days?

“Yes, Brno was a much better place to live in those days than Prague. Because there wasn’t the kind of close watch on everybody that there was in Prague.

“I taught at the university there. And when I compared the atmosphere in Prague at the university and in Olomouc, at that time the only other Czech university, they were incomparably worse, in terms of what people could or couldn’t do. And the general paranoia.

“This wasn’t true in Brno. The cultural life was richer. The kinds of things that theatres were doing could not possibly have been done in Prague, and so on. Moving to Brno was like a breath of fresh air.

“I don’t myself speak German, but everybody in Brno watched the Vienna television so there was this permanent window to the West which was lacking here.

“Prague was an utterly cut off-city; a very claustrophobic, inward-looking and isolated city. Not only in this country but in the whole bloc.

“But Prague was a weird, weird sort of isolated black hole. And I think it affected the atmosphere here very much.”

You were here through normalisation and into the ‘80s. When did you begin to feel the thaw in the ‘80s? And how did it become apparent to you?

“I don’t know that there was a thaw. In some places, particularly in Prague, there were more protests and so on.

“But I don’t think there was a thaw in the sense of, oh, we can do things now that we couldn’t do before.

“It’s true that in ’86 or ’87 we started an English Club in Brno that was quite free. We just invited speakers and so on. But we may well have been able to do that three or four years earlier. I don’t know.

“As I recall it, really until the bitter end here it remained pretty much the same. It was stasis.”

In part two of this interview tomorrow, Don Sparling recounts his moving experiences of the Velvet Revolution, subsequent developments in his career, a hugely popular textbook he authored, and why he can’t stand the Good Soldier Švejk. 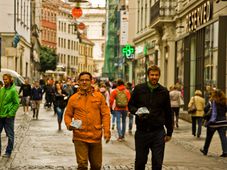 Brno is cool again. The second city of the Czech Republic is finally shedding its somewhat shabby image and finding healthy self-confidence.… Sunday was the fifth anniversary of the death of Václav Havel, the Czech dissident who led the Velvet Revolution and went on to spend…