This coming Thursday, August 31, is the 70th anniversary of Radio Prague's first ever broadcast. Ahead of the big day, I decided to pay a visit to the place our first programme was broadcast from in 1936; Radio Prague's original transmission centre is a very interesting building just outside the central Bohemian town of Podebrady, and is now home to a golf club. My guide was Oldrich Cip, Czech Radio's shortwave expert.

Oldrich Cip has also been a Radio Prague broadcaster in his day, under the name Peter Skala. He and I began our two-part journey outside the transmission centre.

"We are just outside the entrance of the building, which was built in 1921 to '23 for the wireless communication centre of the Czechoslovak Republic, which was constructed very soon after its foundation in 1918.

"The building is quite an interesting object from the architectural point of view. It is built in the Cubistic style that is quite famous... Czechoslovakia and Prague especially is famous for Cubistic architecture.

"This particular one is Rondo Cubistic architecture. As you can see it's a variation of various geometrical...objects. There are even some features of folk culture, especially the ceiling inside."

Do you know why it was built in Podebrady, not in Prague or near Prague?

"I think I do. I think that the main consideration was that the terrain is flat, and that the conductivity of the soil is very good here, because it's near the river Labe [Elbe]. This in fact is an area of inundation. Ground water can be found here at under one metre, one and a half metres. And solid rock when construction started was not found even at 15 metres here." 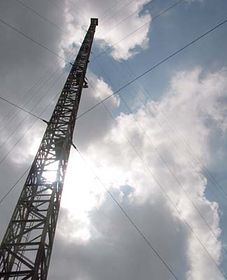 For the layman - how does that help conductivity?

"Well, you see the big towers here, they are 150 metres high and there are two of them - 250 metres apart...in those days when it was constructed there was a roof antenna and every antenna needs a good ground system, because practically the ground is part of the transmitting system.

"And so the ground conductivity is high and this is good for the propagation, or the effectiveness of the transmitting antenna."

And you say there was a 'roof' antenna here - is that what you called it?

"A roof antenna is of course not a complete roof. It was a roof in that sense that from these two towers there was a wire or a rope slung between them - and from that rope there was a system of wires leading to the ground in a roof-like shape."

Today are these towers used as transmitters?

"Not at all. In fact the whole building, from the point of view of wireless radio, was practically abandoned for this purpose, several years ago.

"But because the towers are in construction - and I heard that similar towers of this nature can be found in Norway only - they have been designated as a sort of a cultural heritage - in 2004, if I'm not mistaken." 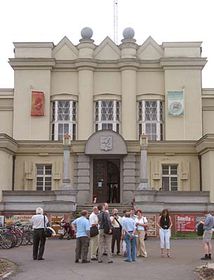 Building in Podebrady Radio Prague was broadcast from here from 1936 until - do you know what year?

"Well, we should probably mention the fact that when this building was built in 1921 it was for wireless telegraphy only. But the radio broadcasting side of the history of this place is of course only from 1936.

"In fact this centre was used for broadcasting relatively late. When Czechoslovak Radio was rebuilding a site in Slovakia, in Rimavska Sobota, in the early 1980s, Podebrady - a relatively low powered transmitter of 50 kilowatts - was still used for Radio Prague in those years."

When was the last broadcast, the last transmission from this site here?

"I think it was in some time in 1982. But this was exceptional, as I said. Just on account of the unavailability of Rimavska Sobota in Slovakia."

You were telling me earlier also that in those days, under communism, you couldn't tell listeners of Radio Prague where the transmission was coming from.

"Yes, that's true. Although in the '80s or the late '80s it was possible, earlier everything was secret."

And do you know anything about the actual construction of these towers here?

"Yes, I think it was quite difficult because of the typical properties of the ground here, which is sand. The engineers of that era had to use piles. I think they used around 800 piles of iron concrete, and they had to drive it into the ground, so that the construction of the building and the antennas is durable and firm." 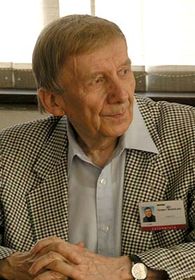 Oldrich Cip So it was quite a feat of engineering to build this place here.

Could you tell me Oldrich if many people had to work here, to operate such a system, or was it kind of self-operating?

"In reality this was only a transmission centre. The operation of the wireless telegraphy was done from Prague. And the receiving centre was also in Prague - because it is not very good to have near the transmitter.

I presume that transmission from this centre here wasn't directed at particular parts of the world? Or was it?

"No, with long-wave transmitters it would be very difficult to construct a directional system. They were used omni-directionally, but communication was quite frequent with European capitals, and centres of wireless telegraphy in other countries."

Tomorrow in the second-part of our visit, Oldrich Cip and I visit the interior of the old Podebrady transmission centre. Among the issues that come up are why Radio Prague was established, what was the content of early programmes, what jamming entailed - and much more.