In two months' time, an electronic appliance developed by a research team in the Czech city of Brno is to be sent into space. It will be delivered to the International Space Station, where it is expected to operate for one year. Meanwhile the team in Brno are busy finishing another international space research project.

The team from the Department of Radio Electronics at the Brno University of Technology designed an onboard receiver for a special type of satellite transponder for the International Space Station. The head of the research team, Miroslav Kasal, says the appliance was commissioned by American researchers.

"In 2002 experimenters in the satellite laboratory of the US Naval Academy asked our research team for cooperation on the development of a transponder for narrow-band and multi-user data communication with extremely high spectral effectiveness."

The main goal of the project is to verify possibilities of keyboard to keyboard satellite communication. The device has been designed to enable up to 20 users to communicate simultaneously. The whole appliance has already passed all pre-flight tests and will be delivered to the International Space Station with the next Space Shuttle mission this summer.

Meanwhile Miroslav Kasal's team are working on another international project.

"At present we are involved in a project of AMSAT DL Phase 3E experimental satellite. The satellite is planned to be on high elliptical orbit with a 60-degree inclination. Its main function will be to verify commanding and ranging in extreme conditions, that is to verify developed technologies for the next spacecraft mission Phase 5A to Mars."

The Brno team also developed two L-band receivers for AMSAT's experimental satellite Phase 3D launched by the Ariane 5 rocket in 2000. Eight command stations participate in the navigation and communication with the satellite. The one at the Brno University of Technology is fully automatic and accessible over the internet.

"The arrangement is suitable for satellites on high elliptical orbit and low Earth orbit. The equipment consists of antennas, systems for automatic satellite tracking, a collection of receivers and transmitters, low noise amplifiers, down and up frequency converters, radio frequency power amplifiers, modems and terminal mode controllers. All these instruments are controlled by two servers where we run robust and complex software modules and a number of interfaces created in our laboratory." 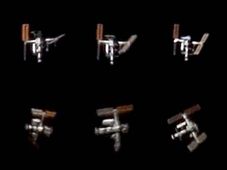