Where will the energy of the future come from? If it comes from nuclear fusion, then the COMPASS tokamak fusion reactor in at Prague’s Institute of Plasma Physics will have played an important role in making it a reality.

It’s about as hot as it gets in Prague, and I’ve been walking around the campus of the Academy of Sciences in Prague’s Libeň district for a half an hour, trying to find which of the inconspicuous prefab buildings houses the Institute of Plasma Physics. I’m sweating like a stoker, and it’s only 35°. But here under the sun is a great place to start imagining the kind of heat that they are working with inside the walls of the facilities here. The temperatures achieved in the tokamak fusion reactor reach those inside a star, and I am going to have a look at it, accompanied by Dr. Pavel Chráska, former director of the institute.

“We are now going to see the tokamak. It’s a facility where plasma is created and confided by a magnetic field. There are several tokamaks around the world, and ours is called COMPASS, we got from the UK from the Culham Science Centre in Oxford. There is now a grid of smaller tokamaks in the EU, some six machines, and they are doing the basic research for larger tokamaks like JET in the UK in Culham or ASDEX Upgrade in Germany.”

My goodness, this is a beautiful thing for any science and technology buff, it’s a gorgeous facility.

“This is the small tokamak – we were showing you the artistic design of the new ITER, which will be ten times larger. So inside the tokamak there is something like the tyre of a car, and around it are many coils in all directions. And then you fill it with hydrogen and you make a charge, and the hydrogen is ionised and you get plasma inside. This plasma is very hot, and we will measure many different properties of the plasma doing research.”

Pavel Chráska How hot is the plasma inside?

“The plasma inside is millions of degrees Celsius. But it’s actually not too dense, and once you switch off the coils everything is gone, because the plasma is formed by a magnetic field. That is why we have all these coils. We put the electricity through them and it forms magnetic fields and the plasma is kept away from the wall, because otherwise, at a million degrees Celsius, everything would be melted.”

So the heat inside this machine is approaching the heat of the sun.

“We could probably say that with a certain degree of correctness [laughs].”

It’s fascinating; it’s impossible to imagine what this relatively small machine, the size of a few walk-in closets, is able to create.

“It’s a small machine. And the beauty of a fusion reaction that you can control it very well. A fission reaction is more difficult to control. Even now, even though the technology is much more sophisticated than 20 years ago, when Chernobyl occurred, and so on, and fission now is very safe, you still have to control the reaction somehow. And here, you will hit a button and the magnetic field will disappear, and immediately there is no fusion.

“You are working with very high electric currents here, so you cannot use normal cables, so you use these copper plates to conduct the electricity into the tokamak.”

So this thing that looks like a glass pillar from the floor to the ceiling is actually like a huge wire, but using copper plates. And how much energy courses through these plates? Inside tokamak “You know, everything is under some kind of construction; we are adding new diagnostics, and everything should be finished by the end of this year. But already we have done over a thousand “shots”, pulses with durations of 300 milliseconds or something like that. But when everything is working, we will need something like 50 megawatts. That would mean a good part of Prague switched off, so for that we have a special, Czech-designed system of power generation. It consists of big, flying wheels – very heavy – and we slowly getting these very heavy things up to 1,700 rotations per minute using normal electric motors. And we can then make our own electricity for this one second with many megawatts.”

So this can make enough energy for half of Prague, but only for one second?

“Not for half of Prague, but a good part of Prague. But only for one second [laughs]. And, again, we are part of Euratom, so our institute is actually leading the Czech association of Euratom in fusion. And through our institute, other institutions in the Czech Republic are connected to Euratom, and we are getting Euratom support for this sort of research. It’s actually an international facility. We used to have a very small tokamak, and even that was used by teams from other countries. Now we have a waiting list of people from all over Europe and even from other countries who want to do experiments here once this COMPASS will be working. Even now we have one Frenchman, one Indian, several people from Slovakia and Ukraine, and now there are people from Portugal and Hungary on long stays putting their own diagnostics or instruments here. So it’s really an international undertaking.” JET tokamak in Culham, UK They are not going to set the wheels turning and produce any plasma for me today, and from my perspective the 3/10 of a second procedure would not leave much of a lasting impression anyway. But the data collected will be used for the betterment of the International Thermonuclear Experimental Reactor being constructed in the south of France, of which the COMPASS is, in a sense, a scale model the tenth of the size. This experimental project should be the beginning of the construction of the world’s first fusion power plant, and a revolution in energy production. But the tokamak is only one part of the cutting-edge science being done at the institute of Plasma Physics.

“This is a unique institute to some extent. On the one side we have this tokamak, then we have the department of pulse plasma, all the way to plasma decomposition and plasma spraying. So I’m not saying it’s the only one, but this institute is a unique place because not so many institutes using different types of plasma – because there is not only one type of plasma, there is thermal plasma, non-thermal plasma and so on. And here we are basically involved with all of them.”

What can you tell me about the results of your work here over the last 50 years?

“Yes, a few examples of our results: the department of pulse plasma has for instance developed a special generator of shockwaves by plasma discharge. This generator is used in machines for breaking kidney stones without surgery. And now we are working on applying similar concepts to cancerous tissue, for instance. This is one example; another is this reactor you have seen for plasma gasification. Now it is very popular, everyone is looking for alternative means of energy. And this is not incineration but gasification; we are not using oxygen. When you incinerate something you are using oxygen – you are actually burning something. We are not burning this material, we are decomposing it using the plasma-chemical reaction.” 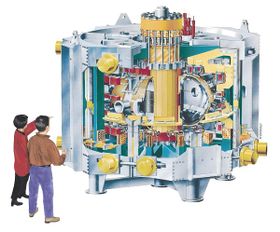 COMPASS tokamak So there is no waste leftover from it.

“Very little. So this is another thing we are working on; we have patented the design for it. Or with fusion, we are part of the fusion community in Europe and we are highly regarded and one of the fundamental laboratories in fusion. And that is why we were offered the Tokamak – otherwise we wouldn’t have gotten it. Or we also have a patented technique for making bulk nano-materials – bulk nano-coatings by plasma spraying, which is completely original. Everywhere we go at conferences people are always surprised. So I think the institute is very well situated in the world community.”

That was Dr. Pavel Chráska of the Institute of Plasma Physics. And that’s all the science we have time for today. Thanks for listening, and I hope you’ll tune in to Science Journal this time next month.

The episode featured today was first broadcast on July 4, 2010. 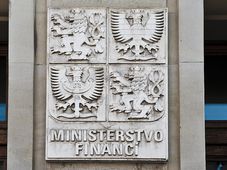 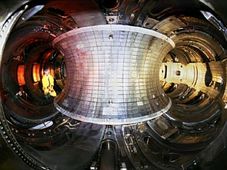 To his many Nobel Prize-winning colleagues, Georg Placzek was a physicist of boundless importance. It was not because of a breakthrough…