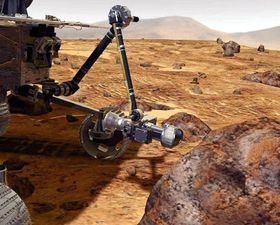 Mars, photo: CTKThe tragic Egyptian charter plane crash that left 148 dead and panoramic colour images of Mars released by NASA after establishing contact with a US probe to search for signs of life on the Red Planet make the front pages of almost all the main dailies today. Domestically, it's a photo of Czech actress Helena Ruzickova that dominates the papers. Mrs Ruzickova died on Sunday at the age of 67 after losing a two-year battle against cancer.

MLADA FRONTA DNES makes the state of the health care system its theme of the day. "Is it really as poor as it says it is?", the paper asks, listing a number of paradoxes; the health sector says there are too many doctors and hospitals and yet patients have to lie in corridors or wait for hours to get medical attention, hospitals are up to their knees in debt and yet they have the money to buy super modern equipment and build extensions, and doctors complain of low salaries while the cars they drive and holiday destinations prove otherwise. Last year, health insurance companies paid out over 150 billion Czech crowns, so why do doctors and pharmacists feel the need to protest against not being paid in time?, the paper wonders.

And moving on to politics...PRAVO writes that according to Czech President Vaclav Klaus the main reason why the popularity of the Communist Party is on the rise is because people are disillusioned with the Social Democratic Party, the senior ruling coalition partner. The paper quotes the president who appeared in a TV discussion programme on Sunday as saying that those people who claim in public opinion polls that they support the Communists are mainly left-of-centre and have shifted to the Communist Party because they are disappointed by the Social Democrats. Social Democrat MP Ladislav Skopal tells the paper he deeply regrets the people's lack of trust and attributes it to the fact that the work his party is doing for the ordinary citizen will only become visible in a year or two, just before the elections.

LIDOVE NOVINY chooses to concentrate on a different topic commented on by President Klaus during his TV appearance. How much of a role should the president play in influencing discussion on the European Union? Mr Klaus intends to play a very active one by engaging himself in public debate as well as discussions with the country's politicians, including the Communists. By the end of January the Czech Republic's representative in the European Commission should have been chosen and according to Mr Klaus he should be a former government minister, ranking the post of EU commissioner just after that of the Prime Minister, the paper writes.

HOSPODARSKE NOVINY, the country's main business daily, warns that a new law proposed by the National Security Office could make it easier for the authorities to keep agendas secret. So far, the paper says, any state authority body that wants to keep part of its agenda secret has to ask the government for permission. The National Security Office plans to propose a law at the beginning of this year that would take that decision-making away from the government, transferring it to individual state officials and the local authorities. This, the paper says, has resulted in much opposition from members of the government's human rights council, who say it could threaten the freedom of information.