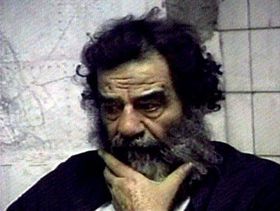 Saddam Hussein, photo: CTK All of today's dailies follow the continuing drama surrounding the arrest of Saddam Hussein - with every paper from MLADA FRONTA DNES to PRAVO speculating on the former dictator's grim future. MLADA FRONTA DNES features a grisly Iraqi quote that reads "We will execute Saddam" while PRAVO's headline reads "I am Saddam Hussein and I want to negotiate"- a last ditch effort by the former strongman as he was taken into US custody. PRAVO writes that the capture of Mr Hussein was far more dramatic than had been previously reported. The daily says had he not given up immediately U.S. forces would have lobbed a grenade into the hole where the former Iraqi leader lay hidden.

Meanwhile in the Czech Republic, PRAVO notes how Monday's sudden blizzards caught many Czech drivers off guard - a photo shows a trio pushing a rather beat-up station wagon on a snow-covered street. Police registered hundreds of car accidents though-out the day - some of them ending in tragedy.

According to the daily, one 25-year-old driver lost control of his car on an icy patch that sent his car onto a railway crossing, where he was killed by an on-coming train. Sombre news indeed and, as always, a sad reminder that every year unexpected snowfall and heavy winds lead to similar such tragedies that would normally be preventable.

Moving on to LIDOVE NOVINY we learn that Deputy Prime Minister Petr Mares has rejected the possibility that around 1,000 Slovak Roma could be granted asylum in the Czech Republic. Mr Mares was in Slovakia to meet with his counterpart Pal Csaky on Monday - he said he considered Slovakia a safe country, so there was no reason to grant asylum.

At their meeting both deputies agreed that Roma migration remained a problem - but in their view was "not a critical one", says LIDOVE NOVINY. Even so, the paper reports, a commission shall be put together to discourage Roma from trying to leave their homelands. Mr Mares and his Slovak counterpart are trying to curb "economic migration" and especially social security fraud, says the daily.

We stay with LIDOVE NOVINY for the moment and another article covering the recent EU Summit in Brussels - an article discussing jokes told by Prime Minister Silvio Berlusconi to break the ice as delegates prepared to meet and discuss the European draft constitution.

Amidst jokes describing throwing his wife out of a helicopter Mr Berlesconi was apparently cut off by the Czech Republic's Vladimir Spilda, the daily writes. Mr Spidla is considered one of the most well-mannered politicians the Czechs have seen in some time, but the daily says his moment of resolve was hampered by the fact that the Romanians and Bulgarians had not yet entered the room; discussions could not get underway.

Finally, we turn to HOSPODARSKE NOVINY and an article that warns the Czech Republic's roads will be going from bad to worse. Already 40 percent of the Czech Republic's main thoroughfares are damaged and in need of repair. Writes the financial daily, once the Czech Republic joins the European Union, the country will see a million more trucks pass through a year, up from an average 6 or 7 million. According to the daily neither towns nor roads are ready for the additional increased traffic.