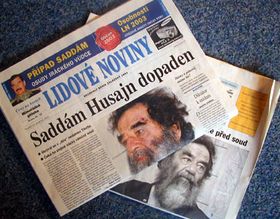 The obvious story that gets the most attention in today's papers is the capture of former Iraqi president Saddam Hussein. Large photos of the now run-down and scraggly former leader dominate the dailies without exception. "Saddam Hussein hunted down", "The end of Saddam" or "Saddam caught" read the headlines across the front pages.

The capture of Saddam Hussein has somewhat overshadowed the failure of the EU summit on the European Union constitution in Brussels, moving the story to second place in the dailies. Nevertheless, all the papers analyse the collapse of the talks and offer a lot of opinion pieces discussing the subject.

Commentator Martin Komarek in MLADA FRONTA DNES writes that the position of the Czech Republic is somewhere between the combative Poles and Germans. "The Brussels collision puts our diplomats in a situation they are not able to solve," says Mr Komarek in MLADA FRONTA DNES. The Czech Republic has become an independent player on the European chessboard and now has to decide which side to take.

The commentator goes on to say that Czechs have no need to be pessimistic. "Our diplomacy has a unique chance to contribute to an agreement between the opposing sides. Haven't we always dreamt of becoming a bridge over troubled waters?" Martin Komarek asks, as he ends his column in MLADA FRONTA DNES.

Staying with European matters, LIDOVE NOVINY reports that former government spokesman, Social Democrat MP Libor Roucek has been elected to the fore of his party's list of candidates for the European Union Parliament. The voting on Sunday was not without controversy, the paper writes. Some of the candidates stepped down because they considered their position on the list too disadvantageous.

For example, former foreign minister Jan Kavan, who was President of the United Nations General Assembly in the past year, placed 11th on the Social Democrats' list of candidates which, in his words, made him virtually ineligible. The head of the Foreign Affairs Committee of the lower house Vladimir Lastuvka has given up his candidacy after being placed 6th on the list. "Either I haven't worked hard enough, or my low position is a result of some internal deals. My resignation should now bring attention to the topic," MP Vladimir Lastuvka tells LIDOVE NOVINY.

On the same topic, PRAVO writes that the Communist Party tried to persuade Jan Kavan to be their European Parliament candidate "Number Two". Mr Kavan received the offer from the party's deputy chairman Miloslav Ransdorf, but has refused. Another communist vice-chairman tells PRAVO that unfortunately, in Jan Kavan the Czech political left loses a first class MEP. PRAVO adds that four Social Democrats who featured among the first 13 candidates on the list have resigned for the same reason as Mr Kavan and Mr Lastuvka.

And finally, the business daily HOSPODARSKE NOVINY writes about the good news which Monday evening will bring to the citizens of the West Bohemian city of Pilsen. Giant fireworks tonight will end a decade of disputes about the route of the Pilsen ring road. A 26-kilometre stretch of the motorway which connects the Czech capital with the German state of Bavaria has been finished and will welcome the first cars tonight. According to the city authorities, 20,000 cars, including 2,500 lorries, pass through Pilsen every day, HOSPODARSKE NOVINY writes. The city authorities expect the ring road to bring a huge relief to the congested city.