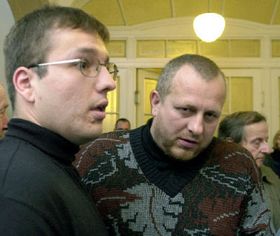 David Pecha (left), photo: CTKAll of Wednesday's leading Czech dailies lead with different stories, with PRAVO carrying a poll which suggests almost 70 percent of Czechs think small countries will lose out under a European Union constitution, and LIDOVE NOVINY leading with the acquittal of David Pecha, who was on trial for propagating communism.

MLADA FRONTA DNES says that the dismissal of the case against Mr Pecha was a good thing. In an editorial subtitled "let's judge actions, not thoughts or words" the daily says communism cannot be compared to Nazism; the former system lasted for decades, had various forms and many of its advocates ended up opposing one another. And while Karl Marx did not like Slavs, he did not plan to put them in concentration camps, says the paper.

PRAVO reports that the drunk driver who killed three police officers at the weekend had 34 previous convictions, among them drunk driving and causing accidents. Businessman Zdenek Bulawa broke every kind of regulation all around the Czech Republic, but was still allowed to keep his license, a police spokeswoman tells the daily. She says that until parliament tightens the law the police will remain powerless in such cases.

An elementary school in the Prague district of Libus runs a special class for Vietnamese children who cannot speak Czech, writes MLADA FRONTA DNES. Their teacher says that while Czech is extremely difficult for the pupils, she is surprised how quickly they can learn. Libus has the largest Vietnamese community in the Czech Republic, and the Vietnamese organisation Bamboo pays for the special classes, reports the daily.

LIDOVE NOVINY reports on its front page that as the new NHL ice hockey season begins, Czech star Jaromir Jagr, is in crisis. Mr Jagr admits that his recent break-up with his Slovak model girlfriend has hit him hard. I don't eat much, I can't sleep and I've lost around 12 kilos, says the best paid hockey player in the world. God has helped me in the past during difficult times, he adds, why wouldn't he help me now?

In an interview in PRAVO, the British conductor Sir Neville Marriner says it was he who taught Czech-born Amadeus director Milos Forman about the music of Mozart. When they were first introduced by the author of the film's screenplay, Peter Shaffer, Mr Forman had known little about the composer. However, says Sir Neville, by the time the Prague shoot for the film ended, the director was something of an expert on Mozart.

And finally, MLADA FRONTA DNES reports on a district in the Moravian capital Brno which has decided to break away from the rest of the country! The "Republic of Herspice" is made up of only a few houses, but it does have its own currency, says the daily. The founders of the new "state" say they were simply dissatisfied with life in the Czech Republic, and it does appear from the article that its foundation was just an excuse to have fun. And drink a lot.