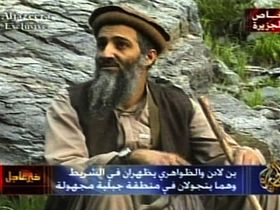 Osama bin Laden, photo: CTK The front pages of all the daily newspapers feature two faces: the world's most wanted terrorist Osama bin Laden sitting on a rock on a picture from the latest videotape he sent the media, and ecstatic Czech football striker Jan Koller, who scored one goal in a EURO 2004 qualifying match with the Netherlands, helping his team win the game. According to HOSPODARSKE NOVINY, people were willing to pay many times the face value of tickets for what is described as the match of the year.

MLADA FRONTA DNES carries a special supplement devoted to the second anniversary of the terrorist attacks on the United States on September 11, 2001. Those who said back then that the attacks on the World Trade Centre would change the world were right, the paper writes. Security, politics - the disaster and the subsequent war against terrorism changed lives of people on all continents.

In an article written for MLADA FRONTA DNES, British philosopher Roger Scruton writes that if you ask western politicians what was it that they are fighting for in the war against terrorism, they will answer "freedom". Freedom on its own means breaking all barriers and removing all obstacles including those that might be important to hold the society together. If freedom is the MAIN thing that the western world can offer, then it is a civilisation heading for self-destruction.

LIDOVE NOVINY comments on a recent statement by Interior Minister Stanislav Gross, who said that the official print version of some laws differ from the versions approved by Parliament and signed by the president. Mr. Gross said that the print version is legally binding and that little can be done about it but to amend the laws concerned. In one of the cases, an expiry date of the end of this year appeared in a freshly passed law.

Cui bono, LIDOVE NOVINY asks. The paper suggests that nothing like that would happen without a reason and that the alleged mistakes must have benefited someone. This should not be difficult to find out, although it will be virtually impossible to find the culprit who actually changed the texts. Whoever it was, LIDOVE NOVINY concludes, he or she has made the legislators look like complete idiots.

Many Czechs decide to work for foreign companies that operate in the Czech Republic. MLADA FRONTA DNES carries an interview with a human resources specialist who warns against problems stemming from cultural differences. Such differences, she says, may become apparent only after the employee has actually started working for a foreign firm.

She says that many Czechs have problems coping with a too strong foreign corporate culture and have to solve an internal conflict between the values of their employer and their own. In such case, she advises either to try to change the corporate culture by negotiating with the bosses who may not have a clue about Czech culture, or find a different job.